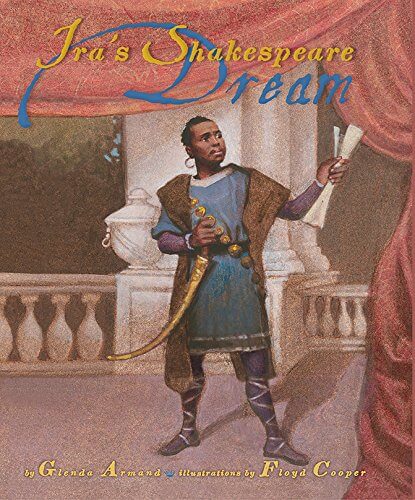 Ira Aldridge dreamed of being on stage one day performing the great works of William Shakespeare. He spent every chance he got at the local theaters, memorizing each actor’s lines for all of Shakespeare’s plays. Ira just knew he could be a great Shakespearean actor if only given the chance. But in the early 1800s, only white actors were allowed to perform Shakespeare.

Ira’s only option was to perform musical numbers at the all-black theater in New York City. Despite being discouraged by his teacher and father, Ira determinedly pursued his dream and set off to England, the land of Shakespeare. There, Ira honed his acting skills and eventually performed at the acclaimed Theatre Royal Haymarket. Through perseverance and determination, Ira became one of the most celebrated Shakespearean actors throughout Europe. Illustrated by award-winning artist Floyd Cooper, this nonfiction picture book biography is a captivating tribute to the inspiring life of Ira Aldridge, and to the renowned works of William Shakespeare.

More books like Ira’s Shakespeare Dream may be found by selecting the categories below: