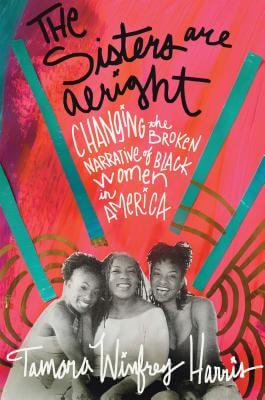 The Sisters Are Alright: Changing the Broken Narrative of Black Women in America
by Tamara Winfrey Harris

The Sisters Are Alright is first of all a love note Tamara Winfrey Harris has written to other black women. It’s a warm, welcoming book that celebrates their complexities and humanity. I hope Harris’ book will be a gift given to many young black girls. I read this book to understand the specific lived experience of black women in the United States, become a better ally and just rejoice in the celebration of women of color.—Bina, Reviewed at: If You Can Read This

What’s wrong with black women? Not a damned thing!

The Sisters Are Alright exposes anti black-woman propaganda and shows how real black women are pushing back against distorted cartoon versions of themselves.

When African women arrived on American shores, the three-headed hydra servile Mammy, angry Sapphire, and lascivious Jezebel followed close behind. In the ’60s, the Matriarch, the willfully unmarried baby machine leeching off the state, joined them. These stereotypes persist to this day through newspaper headlines, Sunday sermons, social media memes, cable punditry, government policies, and hit song lyrics. Emancipation may have happened more than 150 years ago, but America still won’t let a sister be free from this coven of caricatures.

Tamara Winfrey Harris delves into marriage, motherhood, health, sexuality, beauty, and more, taking sharp aim at pervasive stereotypes about black women. She counters warped prejudices with the straight-up truth about being a black woman in America. We have facets like diamonds, she writes. The trouble is the people who refuse to see us sparkling.

Books similiar to The Sisters Are Alright: Changing the Broken Narrative of Black Women in America may be found in the categories below: