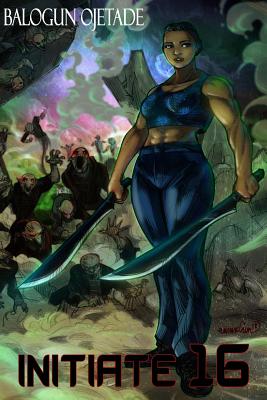 Book Description:
“Initiate 16 lay paralyzed, face-down on a glass table. Scores of blood-stained, shiny metallic needles, attached to snake-like arms, jutted from her back, neck, arms, legs, and even the backs of her heels. Her whole back was peeled open, revealing her spine. The bright lights in the ceiling above her shone on the slick, pink sinew of her back and upon several links of bone that composed her spine. Upon each link was carved an ancient rune ’the Odu’, her teacher had called them. She didn’t know what an Odu was but she knew it gave her power and pain. The nerve-blocking chemicals coursing through her blood, bones and sinew numbed the pain, but she didn’t like them inside her body. She didn’t particularly enjoy initiation either, but it was a step closer to godhood and only a god would dare tread where she would soon have to.” Afrofuturism meets “Into the Badlands” meets “28 Days Later” in this post-apocalyptic, biopunk thriller. It’s the year 2057. Ikoko, a physically weak, abused and psychologically disturbed young woman is selected against her will to become the first physically-enhanced hunter of “mutes” people infected with the horrific Midway Mutagen. If the procedures go well, Ikoko will be transformed into the first of many Ologun human killing machines through genetic engineering. But such a powerful creature must be controlled and she will be via an invasive memory-implantation program. But the plan goes awry when the products of a top-secret project gone wrong break out of the facility where they are being held and flee into the nearby city of Atlagos. In the ensuing panic, the scientist in charge of implanting Ikoko’s memories inserts a program of her own making one that turns Ikoko into a modern-day African warrior part Shaka Zulu, part Mino (“Dahomey Amazon”). Ikoko must face monsters of meat, metal and combinations of both to save herself, those she’s tasked with protecting, and maybe even a world gone absolutely mad.

More books like Initiate 16 (Volume 1) may be found by selecting the categories below: