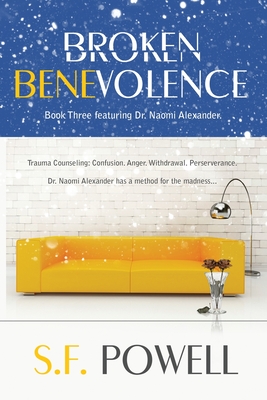 Winter has come in a most terrifying way for Cecily Brooks, making the cold the least of her worries. Broken Benevolence is a suspenseful story of resilience in the face of mounting adversity.
After suffering a vicious attack years ago, Cecily still lives and breathes in the debilitating world of Post-Traumatic Stress Disorder. Nearly every day is a reminder punctuated by episodes of fear and confusion, anger and withdrawal. She seeks solace and support from her husband, Oscar—but little is forthcoming. Oscar hasn’t time to worry about Cecily, when so many of his plans and dreams are falling by the wayside; plans that don’t necessarily include Cecily.
Two are definitely not one in the Brooks household, but it’s all Cecily has. Or so she believes anyway.
Cecily’s job as a finance consultant is the only bright spot; it’s the one place free of fear and hostility. But with Cecily’s boss, Joshua Hall, even that has its own rather interesting complications …
A PTSD attack finds Cecily needing therapy once again, and through trauma counseling with psychiatrist, Dr. Naomi Alexander, Oscar and Cecily deal with many factors affecting Cecily’s troubles. Oscar, however, proves a challenge every step of the way. But he doesn’t know who he’s dealing with: Dr. Alexander thrives on challenges.
Broken and full of shame and despair, Cecily feels she’s heard it all in therapy before. Only this time, the chair is yellow—and the results will be different. Naomi pulls few punches as Cecily’s sessions are exercises in pain and confusion and regret and … revelation.
Cecily’s revelations, however, may be too late: Oscar’s plans are in motion …
Broken Benevolence is a cozy read for fans of stories about relationships and the dark and light in everyday life.

More books like Broken Benevolence may be found by selecting the categories below: