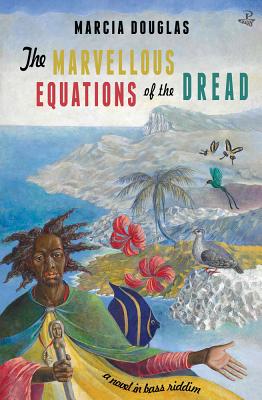 The Marvellous Equations of the Dread: A Novel in Bass Riddim
by Marcia Douglas

Paperback Description:
A much-awaited novel from an award-winning writer a reggae track of ancestral memory and the inexorable search for freedom.
Bob Marley is dead. The Emperor Haile Selassie has been brutally murdered. The armed gangs of Kingston are at war and the murder rate soars. The people have lost all trust in self-serving politicians. It is hard to imagine worse times.
The Marvellous Equations of the Dread: A Novel in Bass Riddim tells the twin stories of Jamaica’s nihilistic violence and its wondrously creative humanity and does truthful justice to both. It takes place in the worlds of the living and in the vivid afterlife of the dead, spanning Kingston ghettoes, the Emperor’s palace in Addis Ababa, and Zion. There is even a fallen angel.
At its heart are the human stories of deaf Leenah who with her mother and daughter writes a powerful woman version of events; the relationship between Fall-down (a street madman and fallen angel) and Delroy an orphaned street-boy; and the meetings in the clock tower at Half Way Tree between Bob Marley, Marcus Garvey and the island’s dead. But before all of this, there is the enslaved boy who was hung from the silk cotton tree in 1766. The novel sets out to retrieve the word at the tip of his tongue.
Not the least of the novel’s marvellous equations are the dread revenants who encourage the living to take responsibility for the future of the nation.

More books like The Marvellous Equations of the Dread: A Novel in Bass Riddim may be found by selecting the categories below: