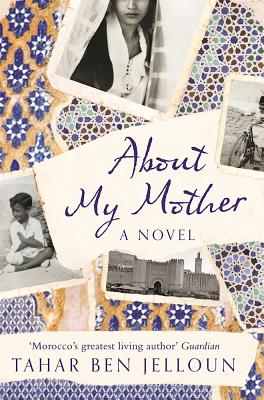 About My Mother: A Novel
by Tahar Ben Jelloun

Book Description:
"Morocco’s greatest living author."—The Guardian UK"A writer of social and moral acuteness."—Los Angeles Times "A writer of much originality."—The Chicago Tribune Lalla Fatma believes she is in Fez in 1944—where she grew up—not in Tangier in 2000, where the story begins.Guided by her fragmented memories, Ben Jelloun reimagines his mother’s life in Fez at the end of the war, in the heavily ritualised world of custom and tradition that saw her married, pregnant, and widowed by sixteen. He gains privileged, painful access to her lives as daughter, sister, thrice-widowed wife—lives in which she had little say, mostly spent working in kitchens, marked by a deep religious faith and love for her family—as Alzheimer’s rips them all away.A delicate portrait of a woman’s slow and unwinding descent into dementia, About My Mother maps out the beautiful, fragile, and complex nature of human experience in prose equally tender and compelling.Tahar Ben Jelloun is an award-winning and internationally bestselling Moroccan novelist, essayist, critic, and poet. Regularly shortlisted for the Nobel Prize, he has won the Prix Goncourt and the International IMPAC Dublin Literary Award. Ben Jelloun received the rank of Officier de la L gion d’honneur in 2008. A frequent contributor to Le Monde, Panorama, the New Yorker, and the Paris Review, his other works include The Blinding Lights of Absence, Leaving Tangier, Sand Child, and Racism Explained to My Daughter.

More books like About My Mother: A Novel may be found by selecting the categories below:

Tell us what do you think about About My Mother: A Novel.