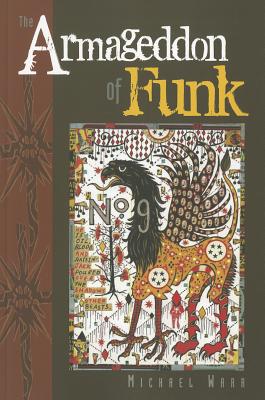 The Armageddon of Funk
by Michael Warr

Paperback Description:
Tracking a nonlinear trek across terrain as distinct as Timbuktu and Baton Rouge, and beliefs as “contrary” as Christianity and Communism, in The Armageddon of Funk Michael Warr manages to interconnect a world of opposites. Via “poetic memoir” we join his navigation through the “apolitical,” rigid morality of the Jehovah’s Witnesses; the revolutionary theories and free love of Black Panthers and Marxists; the promise of a bourgeois future from bank executives; a screaming soldier brandishing an AK-47 in his face, a blizzard of white termite wings; an interrogation under Haile Selassie’s Jubilee Palace; hallucinating of “of cornbread islands” at Chicago’s “Velvet Lounge,” and many “Street Signs, Convolutions, and other California Coincidences” as one poem is titled in this second collection. Warr’s poetry, like his life, is full of interruptions and circularity that captures the broad sweep of the times and microscopic idiosyncrasies of the moment.

More books like The Armageddon of Funk may be found by selecting the categories below: