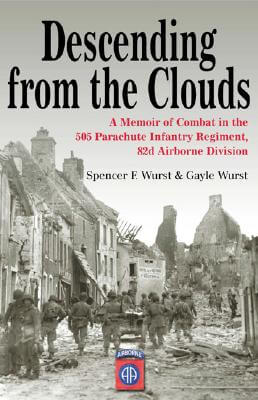 Descending From The Clouds: A Memoir of Combat in the 505 Parachute Infantry Regiment, 82d Airborne Division
by Spencer Wurst and Gayle Wurst

Read Our Review of Descending From The Clouds: A Memoir of Combat in the 505 Parachute Infantry Regiment, 82d Airborne Division

Hardcover Description:
Wurst, a rifleman, spent the most of World War II in the European Theater of Operations as a squad leader or platoon sergeant in Company F, 505. He made three of the four regimental combat jumps, dropping into Italy, Normandy, and Holland. Highlights include his baptism of fire in Italy during the Battle of Arnone; the jump on D-Day and the liberation of Ste. Me’re Eglise (for which he was awarded a Purple Heart); a grueling month of combat in the hedgerows of Normandy (a second Purple Heart); the ferocious battle with the SS for the highway bridge at Nijmegen, Holland (Silver Star); and survival in the Ardennes, where he found himself as point man on his twentieth birthday, in a long, bitter march toward the shoulder of the Bulge.Wurst’s narrative, set against a carefully researched historical background, offers a unique view of the heat of battle as experienced by a noncommissioned officer in the 82nd Airborne Division. Initial chapters chronicle his training before mobilization, when he lied about his age (15) to the National Guard in Erie, Pennsylvania, and his later experience in a heavy weapons company of the 112th Infantry Regiment, 28th Infantry Division. In 1941, Wurst was on a truck returning from First Army maneuvers in the Carolinas to Indiantown Gap Military Reservation when he heard the news of the attack at Pearl Harbor. He recounts life at Camps Livingston and Beauregard in Louisiana, and at the newly formed Parachute School at Fort Benning, Georgia, where he was stationed in the infamous "Frying Pan" area. Descending from the Clouds portrays the passage from innocence to experience. Wurst begins as a 135-pound kid marching down his hometown streets in the National Guard, wearing the remnants of a World War I uniform and pulling by hand a water-cooled .30-caliber machine-gun mounted on a wooden cart. Five years later, he is a hardened platoon sergeant, leading his troopers through the frozen killing fields of "Death Valley" in Germany’s Huertgen Forest. His story is the story of the coming of age of the American military: fewer than twenty men per company who started with the 505 in the Frying Pan returned home. REVIEWS "… gives a good sense of the confusion of airborne operations and close combat…makes an excellent book for company level leader development on the subjects of discipline, training, and combat leadership."Army History, Winter 2010

Books similiar to Descending From The Clouds: A Memoir of Combat in the 505 Parachute Infantry Regiment, 82d Airborne Division may be found in the categories below: