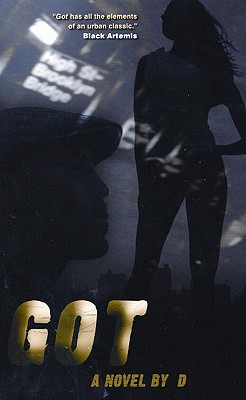 Got (Seven Weapon Arsenal)
by D

Paperback Description:
"There’s a new player stepping into the street-lit spotlight, and he’s one to watch…Urban libraries have to get Got."
—Library Journal (starred review)

"A gritty, streetwise debut [with] solid writing and unrelenting, brutal detail…The first release from The Armory, a new imprint showcasing modern urban noir, is sure to appeal to the audience that has make Akashic’s city-themed anthology series (Brooklyn Noir, etc.) a hit."
—Publishers Weekly

"Packed with a rare combination of drama and class, Got has all the elements of an urban classic in the vein of Carlito’s Way and Bodega Dreams. Let the poseurs beware: In his first time out, D doesn’t just raise the bar on street lit, he broke the damn thing!"
—Black Artemis, author of Picture Me Rollin’

"Like the work of Iceberg Slim, it’s ultimately about the search for self in a soulless place."
—Tim McLoughlin, award-winning author of Heart of the Old Country

"Got is like a dope hip-hop song. It mixes the swagger of Jay-Z, the rhythm of DJ Premier, the street intellect of Rakim, an the storytelling skills of 2pac. It’s the street fiction we’ve all been waiting for."
—Backlist.com

A selection of Kenji Jasper’s street-lit imprint, The Armory.

There’s a young man living in the infamous Crown Heights section of Brooklyn. He is an orphaned college student trying to get through his sophomore year at age twenty-three, years behind the traditional undergraduates. His two best friends, Will and Chief, are an ex-drug dealer and a computer hacker. And his boss, Tony Star, is the most dangerous man in Brooklyn, an arch-criminal with enterprises legal and illegal across New York City and beyond.

Our young man’s job is to pick up the weekly take from Star’s establishments and deliver it to him at the end of a night. It’s one day’s work a week for the kind of pay the fortunate get in a year. The money covers his tuition and the small apartment he rents in Crown Heights. Life is simple. And simple means good.

Then, everything falls out of balance. Someone decides to rob him for the week’s take, and leave him for dead. His boss, being generous, gives him until the end of the night to recover what’s been stolen. But as the night moves forward and people start dying, this young man begins to learn the hard way that his chosen way of life is nothing but an illusion.

Books similiar to Got (Seven Weapon Arsenal) may be found in the categories below: