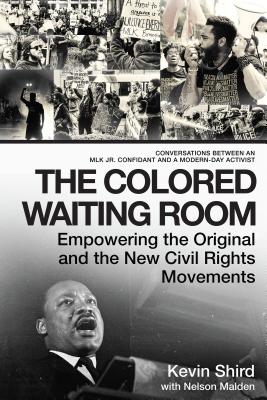 The Colored Waiting Room: Empowering the Original and the New Civil Rights Movement
by Kevin Shird

Book Description:
Extraordinary conversations between a confidant of Martin Luther King Jr. and a modern-day activist leads to the game-changing realizations that a second-wave civil rights movement is unfolding and that we must embrace the lessons of the past to effect lasting change.

In Montgomery, AL, one of the most vibrant and controversial hot spots of the American civil rights movement, Nelson Malden’s barbershop was where its courageous leaders, including his friend Martin Luther King Jr., gathered to organize protests and boycotts and to write the speeches that would help criminalize racial segregation and discrimination.

In The Colored Waiting Room, activist Kevin Shird heads from his hometown of Baltimore, MD to Montgomery to meet eighty-four-year-old Nelson Malden and contextualize the significance of recent racially motivated events, and the demonstrations is Charlottesville, Ferguson, Baltimore, and around the country. The result is a groundbreaking understanding of today’s burgeoning second-wave civil rights movement and the urgent actions necessary for racial equality and change.

Here, Shird raises the profound question of whether blacks are still in a colored waiting room, biding their time and waiting for racial equality to be the norm. He also shares compelling personal realizations on the lost connection between African American youth and their ancestors’ fight against slavery and Jim Crow laws, asking throughout this pivotal volume, how far can we go without knowing where we’ve come from?

More books like The Colored Waiting Room: Empowering the Original and the New Civil Rights Movement may be found by selecting the categories below: