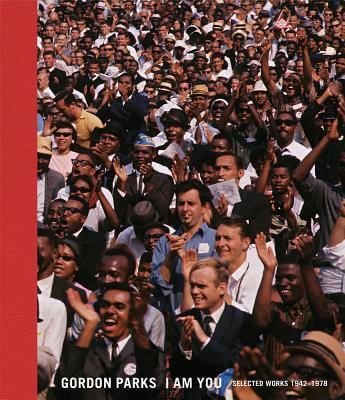 Out of Stock More Coming Soon

Book Description: Injustice, violence, the Civil Rights Movement, fashion and the arts--Gordon Parks captured half a century of the vast changes to the American cultural landscape in his multifaceted career. I Am You: Selected Works 1934 1978 reveals the breadth of his work as the first African American photographer for Vogue and Life magazines as well as a filmmaker and writer.

Reportage for major magazines dominated Parks’ work from 1948 to 1972. He chronicled black America’s struggle for equality, exposing the harsh realities of life in Harlem, institutionalized racism and shocking poverty. Parks was equally accomplished as a portraitist, capturing figures such as Malcolm X, Martin Luther King, Duke Ellington and Ingrid Bergman. He turned his attention to film in the 1960s with social documentaries, as well as the cult classic Shaft (1971).

This volume traces all the threads of Parks’ achievement, examining the interaction between his photographic and filmic visions. Gordon Parks (1912-2006) was born in Fort Scott, Kansas. He worked as a brothel pianist and railcar porter, among other jobs, before buying a camera at a pawnshop, training himself, and becoming a photographer. In addition to his tenures photographing for the Farm Security Administration (1941 45) and Life (1948 72), Parks evolved into a modern-day Renaissance man, finding success as a film director, writer and composer. He wrote numerous memoirs, novels and poetry, and received many awards, including the National Medal of Arts and more than 50 honorary degrees.

More books like Gordon Parks: I Am You: Selected Works 1934-1978 may be found by selecting the categories below: