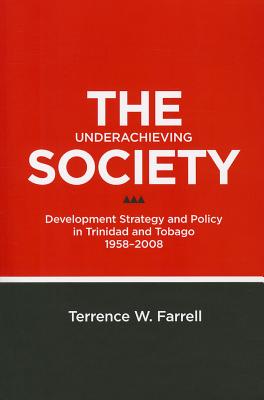 The Underachieving Society: Development Strategy and Policy in Trinidad and Tobago, 1958-2008
by Terrence W. Farrell

Book Description:This work discusses the effectiveness of the sets of policies employed by the government over a fifty-year period spanning 1958 to 2008 in the effort to foster the growth and development of the economy. It concludes that Trinidad and Tobago has underperformed in respect of its growth and development. Compared with other countries more or less similarly placed around 1960, Trinidad and Tobago has not achieved in key areas of health-care delivery, education access, and income and wealth, notwithstanding its substantial resources of oil and gas. Historically, Trinidad and Tobago’s economy cycles from boom to bust depending on what happens to the price of oil. The carefree, undisciplined lifestyle of most of the population is occasionally perturbed by a paroxysm of social unrest. Downturns are accompanied by ritual incantations by government officials of the need for "diversification" to reduce the country’s dependence on oil and the energy-based industries, the formation of new committees, task forces and boards, and considerable hand-wringing and angst about the "sustainability" of government fiscal operations. Seemingly bold new initiatives and projects are announced, and all the while people wait and secretly hope for a quick turnaround in the price of oil, ammonia, methanol and natural gas so that rents will again begin to accrue, government spending programmes can restart and the fete can resume. Trinidad and Tobago will not achieve its potential for development unless and until this cycle is broken.

More books like The Underachieving Society: Development Strategy and Policy in Trinidad and Tobago, 1958-2008 may be found by selecting the categories below: