Book Review: God’s Politics: Why the Right Gets It Wrong and the Left Doesn’t Get It 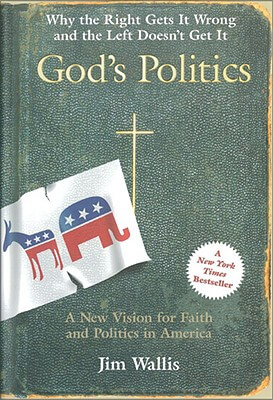 Read a Description of God’s Politics: Why the Right Gets It Wrong and the Left Doesn’t Get It

"The 2004 election was one where, no matter who won, almost half the population was going to feel absolutely crushed. We are now deeply divided. So how do the people of the red and blue states talk to each other, especially people of faith?

The values of politics are my primary concern in this book. God is not a Republican or a Democrat. God's politics is therefore never partisan or ideological, but reminds us of the people our politics always neglects- the poor, the vulnerable, the left behind.

And God's politics pleads with us to resolve the inevitable conflicts among us, as much as possible, without the terrible cost and consequences of war. This book challenges both the Right and the Left...  to enter into a new conversation of personal faith and political hope."

If there's any book with the potential of healing the rift between the citizens of the Red and Blue states it's God's Politics. For it's author, Jim Wallis, has a way of holding both sides accountable without adopting a tone likely to alienate or offend anyone.

Reverend Jim is a preacher one would expect to side with President Bush in these divisive days when the Republican Party base is primarily comprised of born again Christians spread across the Bible Belt. But because this evangelical minister answers to a higher authority, he has no problem questioning the current administration's motivations, or pointing out how the nation's resources might be better spent.

Wallis' basic argument is that the Right has "hijacked the language of faith for its political agenda," and he wonders why we've come to accept a notion of modern morality which associates believing in Jesus with being pro-war, pro-rich and pro-Republican. He suggests that to undo this error, it is incumbent upon each of us to hold our leaders personally accountable by expecting our deepest moral convictions to play a part in the country's public policy.

Chapter 1, entitled "Take Back the Faith," examines just how religion has been, by and large, appropriated by Conservatives and abandoned by Liberals. He says that the election results were no surprise to him because the Left ignored ethical issues at its own risk, while the Right was recognizing the motivating potential of spirituality.

After establishing, however, that God doesn't have a political persuasion, Wallis goes on to devote subsequent sections of the text to tackle a series of thorny, common sense questions like, "When did Jesus become pro-war?" and "When did Jesus become pro-rich?" Some areas of inquiry are certain to make even the most devout church-goers squirm, because he repeatedly challenges the coziness of the status quo.

For instance, in Chapter 19, "Telling the Truth About Race," he refers to slavery as America's original sin. "Slavery and the subsequent discrimination against black people in America is of such a magnitude of injustice that one would think that national repentance and reparations would be called for," Wallis says before regretting that we are plunged too deeply in a state of denial even to consider either option.

Both Liberals and Conservatives could learn a lot from this people-oriented book which would have these supposedly opposing camps join forces to right the ship of state before it's too late. But I suspect that the message has to reach those wielding the power, too, to be of much consequence. So, I pray that the President will read God's Politics to get a sense of how he might unite and lead America down a truly righteous path, rather than merely presume he already has a God-ordained mandate to squander political capital in any way he sees fit.

Read To Be Determined’s description of God’s Politics: Why the Right Gets It Wrong and the Left Doesn’t Get It.