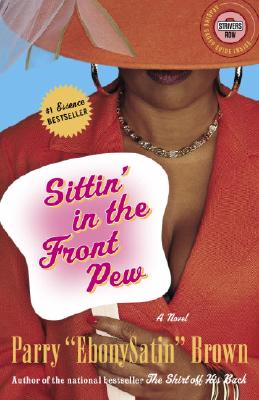 Read a Description of Sittin’ In The Front Pew: A Novel (Strivers Row)

Glynda Naylor, a new lawyer living in Los Angeles, receives a call from one of her three sisters informing her of their father's death. Glynda immediately flies home to Baltimore in order to bury her father, Edward Naylor. Glynda must confront the passing of the man who's been her Rock of Gibraltar, her sisters, and her father's many secrets that float from his past and into the Naylor sisters' heart-wrenching present.

I liked Sittin' In The Front Pew. The book provides a realistic representation of what a family goes through when mourning a loved one's death. Brown showed the hugging and kissing moments, as well as the bickering, the aggravations, and the laughter. There were a couple of objections I had to a few of the characters, generally, the novel was cooking with gas.

For the most part the characters were nicely developed. The four sisters had their own individuality. Glynda served as the narrator of the book and she was all right. But there were times when she got on my nerves by constantly re-identifying folks. I had a persistent need to tell Glynda, "I know Estelle was your daddy's finance' and that Uncle Thomas is your only uncle and Dawn is your oldest sister, and Renee is the baby. Please believe me, I got it already - Move ON!"

Renee and Dawn were interesting and nicely developed characters. But the award for "Scene-Stealer" goes to Collette. I loved Collette. She is cheap, has a multitude of issues, is loaded with a 110 percent attitude, and, in addition, has a mouth to match her 'tude. While Collette is the sort of character that can completely dominate any scene she's in, but author Brown struck a good balance to ensure that Collette didn't overshadow the other Naylor sisters.

I had a major problem with Uncle Thomas' manner of speaking. His dialect was "country" while other characters' speech patterns were not. After reading a few chapters, every time Uncle Thomas spoke I got irritated. I was reminded of one of a criticism that Margaret Mitchell received for Gone With The Wind, that the black slaves spoke in an ignorant, unintelligent fashion, while the white characters spoke grammatically correct English. Brown's depiction of Thomas' speech does leave room for the implication that a northern education is better than a southern one. Since Edward and Thomas are brothers, I assumed that Edward would have a heavy southern accent as well. And if he did, doesn't it make sense that his daughters' speech would be influenced by it, and if so, shouldn't it be portrayed as well? Why, I know folk that speak with southern inflections and accents and haven't set foot outside the state of Indiana in their lives, but to hear them talk is to hear Tennessee, Georgia, Alabama, Arkansas and Mississippi.

Sittin' In The Front Pew is a cute book that flowed fast and easy. I read it in one day, and while I shed a few tears, had a few chuckles, I mostly enjoyed the book.

Read Villard’s description of Sittin’ In The Front Pew: A Novel (Strivers Row).