Thumper Unveiled? Not Quite Yet
by Leah Mullen

For as long as I've been writing about the publishing industry, interviewing authors, editors, publicity people and other folks that make the world of books go round, I'd say that speaking to Thumper of AALBC.com fame was the first time I had the opportunity to interview a colleague.

But before I go on, let's take care of one factual house keeping issue. Troy Johnson, founder of AALBC.com and Thumper, book reviewer and discussion board moderator are not one in the same as many have come to believe since the two started working together five years ago.

"People don't realize that Troy and I are two different people," Thumper said from his home in Indianapolis. He ended the sentence with a hearty laugh making it quite obvious that he's having fun with all of the intrigue that his anonymity has created.

Okay, so if Thumper isn't Troy Johnson who is this mysterious character who has become a sought after book reviewer as well as an authority on the still burgeoning Black book industry?

Thumper, who still wishes not to reveal his true identity is a clinical engineering technician for one of the largest hospitals in Indianapolis and in his spare time he reads two books a week "when the mood is good," he says.

The bibliophile admits that there are times when he takes a hiatus from reading and ironically it was one of his breaks that led Thumper into a solid relationship with one of the most popular websites devoted to Black books.

Thumper said he encountered AALBC.com back in 1996 when he had purchased his first computer and was surfing the web. The fledgling website consisted of a few pages and a discussion board in those days. What captured his attention was a review dissing James Earl Hardy's B-Boy Blues. Thumper had a different opinion. "So I got bold and emailed Troy," he said.

Troy wrote back suggesting that Thumper add his opinion to the mix, and that's when Thumper began to consistently post his opinions. And the board was hopping since the mid nineties was the time when African American Interest titles were be published in numbers not seen in decades. Thumper said he regularly posted to the board until he got into one of his moods where he didn't want to look at another book. And since he wasn't reading, he didn't post. 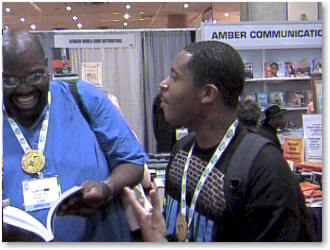 Thumper with author Reginald Hall - Pitching a Book to Thumper is not easy.

At that point he hadn't given much thought as to who was reading his stuff until one day during his break he gets an email from Troy asking where he'd been. Apparently, the people who frequented the site missed him and wanted Thumper back. Troy even offered him his own space on the growing website: Thumper's Corner. Now over 200 reviews and hundreds of web pages later, AALBC.com and Thumper have blown up. Well as far as book publishing goes, the site is hot receiving over one million hits a month and Thumper is a popular fixture.

In the last few years AALBC.com has received a fair amount of media attention. The New York Times referred to AALBC.com as "the most successful online service that specializes in books for African Americans." And Black Issues Book Review called AALBC.com "a true smorgasbord for those who love African American Literature." And as the most visible personality Thumper has been quoted in such publications as Publisher's Weekly.

Still we don't have a birth name for Thumper, however we have some other developmental information that provides some insight on what motivates this online enigma.

"I grew up in what was then called the Riverside area," Thumper wrote in an email. "Back then it was a real nice neighborhood. We lived down the street from Bush Stadium (a baseball diamond that our regional baseball team played) and the CYO field. Now the neighborhood is riddled with empty houses and crack houses," he said.

Perhaps the biggest influence on Thumper was his mother who adored the work of Kathleen Woodwiss and Rosemary Rogers. As a matter of fact, Thumper says that Sidney Sheldon's Bloodline was the first novel he ever read in its entirety when he was a teenager learning things he said "no 13-year-old boy should know or come to think of it many things men should know, but don't!"

Thumper began reading back in the 1970's when Black commercial fiction didn't get published as often. "There was no Terry McMillan, Sandra Kitt or Anita Richmond Bunkley."

As for Thumper it would be fifteen years before he would discover Black books through the Internet. And now today as an expert following the growth of the market he reported that for the first quarter of 2002, 96 African-American interest books were scheduled to publish through the mainstream houses. This number doesn't even include the small independent houses and the self-published authors who are publishing now more than ever.

So there's a lot to write about and colleague-to-colleague I asked Thumper why there are so few of us who focus on writing about black books. "It's an industry that's seen as profitable, but as far as legitimacy and receiving the critical analysis it deserves it still hasn't gotten that," he said.

Also Thumper says that just because Black authors are being published more, that doesn't mean that the Black writer has just come into existence. "There have always been Black authors," he said. "They just weren't connected to an audience."

Now Thumper plans on taking his unique writing style to another level. If you look at the body of work he has created on AALBC, you'll notice that his reviews are different than those found in the New York Times. "Most of those reviews are by other writers and they get technical," he said. "And you never get a sense of who the person is who is writing and whether or not they liked the book." With Thumper, he leaves no doubt in your mind. In a recent review of Seventh Child: A Family Memoir of Malcolm X by Rodnell P. Collins with A. Peter Bailey, Thumper stated that it was "about time someone from the family spoke or wrote about Malcolm X. It is imperative that the most accurate representation of the man is available considering that he will be the subject of much scholarship and admiration."

However Thumper did have a criticism of Seventh Child, which of course he shared with a little humor. "One complaint I have concerning the book was its repetition of titles and Blood relations," he wrote. "I thought more than once, "Yeah, I know who Aunt Hilda is...for the 14th time."

So when are we going to find out the true identity of Thumper?" I asked and I received no definitive answer. However, Thumper did say that he'll be attending more book-oriented events like BookExpo America, which is going to be held this year [2002] in New York City.

Alas the mystery continues, but no matter. An unveiling is not all that important in the scheme of things. "The books are still the main thing for me," he said. "And communicating with other people who love to read."