Book Review: Zulu Heart: A Novel of Slavery and Freedom in an Alternate America 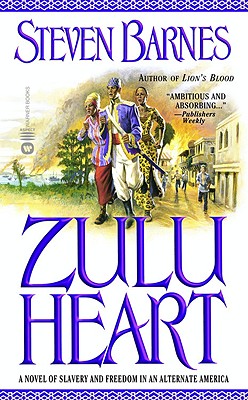 Read a Description of Zulu Heart: A Novel of Slavery and Freedom in an Alternate America


Just when I thought the Harry Potter books were the most satisfying series in literature today, Steven Barnes emerges with Zulu Heart, the sequel to last year’s off-the-hook novel, Lion’s Blood. The spell Barnes wove hasn’t worn off yet, and I was not expecting this sequel. Lion’s Blood left me wholly satisfied and had already secured Steven Barnes place as one of my favorite authors. Reading Zulu Heart was like finding out that Christmas is really three days long instead of one. It has everything that makes a story an epic: great characters, a wonderful plot, plenty of fast paced action, an intelligent storyline, and presents the full spectrum of human emotions. I finished Zulu Heart astounded and hungry for more.

Best friends, Kai—the black slave master, and Aidan—his former white slave, have come together again in a tale laced with treachery, heartbreak, friendship and redemption. The story begins with Kai getting familiar with his position as Wakil and Aidan working and supporting his family while learning what it really means to be a free man. The paths of these two men, once again, cross and each must rely on the other to ensure the future of their families and their freedom.

I don’t know how Barnes did it, but Zulu Heart has clearer insight into the human heart, as well as more depth, action and wisdom than Lion’s Blood, while at the same credibly mixing fantasy with history. Barnes threw all these things into a bowl and emerged with an alternative world that is both foreign and strangely familiar. I didn’t try to analyze as to whether Barnes got X from the so-and-so period from Egyptian history or Y from that battle from the US Civil War. I simply relaxed and left the driving of the story to him. What a ride! I want to go on it again.

Kai and Aidan are magnificent characters. I thought they were already solidly developed from reading Lion’s Blood, but in Zulu Heart, Barnes dug even deeper into the rich soil of their beings. The characters became even more complex as they faced life and death decisions that were outside the scope of their normal, everyday lives. What impressed me most was the attention Barnes gave to the supporting characters such as Kai’s first and second wives, Lamiya and Nandi, and Kai’s tutor and adviser, Babatunde. By developing these characters more fully, Barnes gave Kai’s world added dimensions that allowed me to see it more vividly.

Zulu Heart is an amazing installment to an outstanding series. While Barnes’ creation of an alternative United States and its slavery has become more credible and substantial, the foundation and real attraction of both books is the friendship Kai and Aidan, who should have been anything to each other but brothers. The most exciting portion of the book was the ending, for it hinted that Zulu Heart might not be the last installment. I’m keeping my fingers crossed and praying that this is indeed the case. Steven Barnes is an incredible author who is still flying below the radar of the majority of readers. I can think of no finer introduction to Barnes than reading Lion’s Blood and Zulu Heart.

Read Aspect’s description of Zulu Heart: A Novel of Slavery and Freedom in an Alternate America.