Book Review: Fever In The Blood 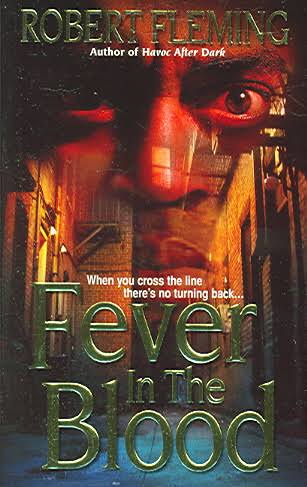 Read a Description of Fever In The Blood

I must say that I write this review from a somewhat prejudicial position. I am a fan of Robert Fleming. I loved the two anthologies he edited, Intimacy and After Hours. Fleming's short story collection, Havoc after Dark, is simply splendid! It was with the bated breathe and the anxiousness of Christmas that I could not wait to get my hands on Fleming's first published novel, Fever in the Blood. With this novel, which is based on the inner most thoughts and emotions of a serial killer, Fleming have created a character every bit as fascinating, frightening and captivating as Richard Wright's Bigger Thomas. To say that Fever in the Blood was worth the wait is an understatement of the first order. It is a triumph!

Twenty year old Eddie Stevens is a walking human mass of out of control rage. When Eddie was eleven years old both of his parents and his two younger sisters were brutally tortured and murdered before his eyes. He never recovered. Eddie was later adopted by Congressman Franklin Delano Stevens and his wife Margaret, as a means of generating favorable publicity for the Congressman during a re-election year. Eddie's new family and surroundings did not diffuse the anger and pain his early childhood brought him nor did it heal the wound in his humanity from seeing his family killed. In fact, his anger and pain evolved into a rage that he could not contain, so he began killing women. By the age of 20, Eddie is a full blown serial killer. As Eddie's murders wreak havoc with public safety, Eddie's rage is reaching its zenith.

Fever in the Blood is a marvelous work of fiction. Fleming created a wonderfully complex and frightening character in Eddie Stevens. Immediately, I had sympathy for him. I was enthralled by him, yet the fact that Eddie was a serial killer was always front and center. Fleming painted Eddie with multiple shades of colors. Eddie was not the stereotypical murderer, nor was he the common troubled young black man. Eddie was real. I had no trouble seeing Eddie as an air breathing person, which is a scary. While Eddie had a childhood that I would not wish on my worst enemy, I am not blind to the fact that he could easily slit my throat as well as bid me a pleasant ’hello’ without skipping a beat.

Fleming wrote the novel using a first person narrative. Normally, I do not like reading novels told in the first person. I find that many authors do not possess the skill to pull it off. Either the narrative falls into a dull, boring, mind-numbing monologue and/or the author loses sight of the storyline. Happily, neither is the case with Fever in the Blood. Fleming placed me square dab in the middle of Eddie's mind and left me. I was somewhat a prisoner, because often times Eddie's mind is not a good place to be. There were moments when I had to put the novel down and go look at TV or walk my dog Sasha just to get away from Eddie's rage/pain for a minute. The only other book that sent me through the same dilemma was Vladimir Nabokov's Lolita. Fleming possess the same ability Nabokov had, the writing grabbed me by the neck and would not turn me loose.

Fleming did more than create Eddie Stevens, he held up a mirror to show our society as it is today and its role in the birth and upbringing of Eddie Stevens. Earlier in this review, I compared Eddie to Bigger Thomas. One of the differences between Fever in the Blood and Native Son is Richard Wright boldly told white America the truth in Native Son and put the blame at its feet. In this novel Fleming gives today's black community the same treatment. The question needs to be asked, can we, as a people, bear the responsibilities of creating Eddie Stevens? Can we change before it is too late?

Fever in the Blood is a brilliant, multidimensional novel. Only time will tell if it will eventually emerge as a masterpiece. I dare believe that it will. The novel is certainly one of the best books that I have read this year. I knew a few years ago that Robert Fleming was an author to watch for and Fever in the Blood bears this out.

Read Kensington’s description of Fever In The Blood.