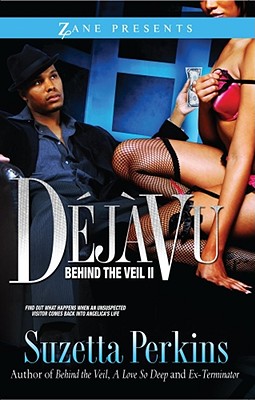 A few minutes ago, I finished the novel D’j’ Vu: Behind the Veil ll by Suzetta Perkins.  D’j’ Vu is the sequel to Perkins’ earlier novel, Behind the Veil.  D’j’ Vu is the continuing story of a stripper recently released from prison who fights to leave her past in the rear view mirror as she speeds toward a fresh new start.  With my usual disdain for this type of story featuring strippers, drug dealers and pimps (oh my), two magic words on the top of the cover caused me to pick up this novel, Zane Presents’.  It was Perkins’s story that kept me glued to the pages.  I had a few skeptical moments during D’j’ Vu nothing serious enough to tick me off or stop me from finishing the book.  D’j’ Vu is an enjoyable read.

Now pay attention, this is going to come at you fast and hard:  Angelica Barnes is a former stripper who just got out of from prison.  Angelica seeks the forgiveness of Margo Myles.  She had an affair with Margo’s husband Jefferson.  Angelica leaves her hometown and goes to New York to start a clean slate.  Quickly, she falls back into old habits, old jobs and runs face to face with an old enemy.  Angelica finds out that not every shut eye is sleep nor is every goodbye gone.

I came to D’j’ Vu in complete ignorance. I had not read Behind the Veil.  I knew I was taking a risk.  I had not read any of Perkins earlier works.  I did not know if she had the ability to write a sequel that could stand alone, be read as a separate novel without the reader having read the first installment.  The risk paid off.  Perkins does an excellent job relaying specifics of the first novel while keeping the current story moving at a fast pace.  I did not feel slighted or cheated out of any pertinent information.  I was pleased.

However, I was not pleased with every aspect of the novel.  There were moments in the story that could have used more details; example, the final situation involving Margo.  I am not going to spoil the ending of the book.  Trust me, the ending was sparse on details and left me with questions:  the location of a certain character; what did Dina have to say about it (aka DNA) and when?  I had to reread the last few pages three or four times to make sure those pages were not stuck together or that I had not missed anything.  If this was Perkins way of putting me in suspense, it did not work.

I did not like the direction the story took during the second half of the book, the book’s focus shifted from Angelica to Margo.  Initially, Angelica was the main character of the book.  D’j’ Vu shifted the spotlight to Margo and her relationships with Jefferson and Malik.  Oftentimes, I wished Margo and her gentlemen company would blow town for a few minutes so that the story would get back to what was happening with Angelica.  If Perkins felt this strongly about Margo, she should have had her own novel.  The Margo storyline is strong enough to stand on its own.

Perkins gave me an unexpected, unintended laugh.  I hate hokey stuff.  It is not feasible to have a 21st century urban story laced with 1930s Hollywood-influenced romantic dialogue’that dog won’t hunt!  Perkins tried it anyway, ’Ari, we didn't have sex.  We made love.’ *LOL* Geez-us b a fence!!  Perkins is you serious?  I never thought Mayberry R.F.D. would make its way into a novel about a black stripper’making luuuuuuuuuvvvv. *LMAO* Oh, my stomach hurt’*still LMAO*

D’j’ Vu is a highly readable novel.  I took more pleasure in it than I would have imagined.  The sequel moved at a fast paced, stands on its own as a solid read without having read the first novel.  I recommend D’j’ Vu; stripper, some unrealistic dialogue and all.