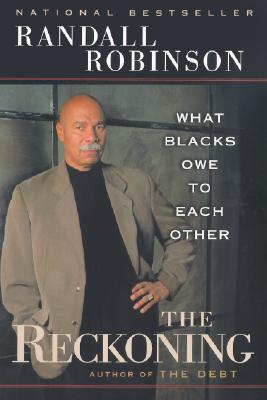 Read a Description of The Reckoning

Randall Robinson, the author of The Debt, has written a new insightful book, The Reckoning: What Blacks Owe To Each Other. In this volume, Robinson examines the class structure that exists in the black community; the overall damage that could be done on the race as a whole; as well as demanding that we, as a people, wake the f--- up! We need to reach back and pull others along, to see our "leaders" for who they really are, and to recognize that we are either going to get out together or not at all! Plainly, The Reckoning is a damn good, thought-provoking book.

The Reckoning originates from a speech Robinson made at a banquet/award ceremony and the impression the award recipient, PeeWee Kirkland made on him. This encounter caused Robinson to question his views, perceptions and prejudice of the black community as a whole, inspects the separation between the haves and have-nots of the black community through the lives of PeeWee Kirkland and New Child Lynch, one of the men that benefited from Kirkland's time and attention. Interwoven with the recitation of PeeWee Kirkland and New Child Lynch's life story, Robinson scrutinizes matters that impact the black community as a whole: absentee fathers; the rise and consequences of building prisons and how this is benefiting the white folk, who stands to make great financial gains by owning the companies that builds the prisons, plus the predominantly white towns who benefits from the jobs employed at the prisons; the violence; the policies that President Bill Clinton enforced that was detrimental to black folks and yet Clinton enjoys and overwhelming amount of support from black folk; the school and criminal justice systems; and the class/caste structure within the black community, in addition to the belief that it is imperative blacks, who live in the upper echelon of the economic food chain, assist blacks in poverty; and at times the hopelessness are all the products of the Americanization of slavery. We have to open our eyes to what is truly happening in America TODAY, and realize that we will sink or swim together.

I had a little thinking to do before I read The Reckoning. I wasn't quite sure if I wanted to give Robinson a second reading. Reading The Debt was enough for me. If you weren't around at the time I read The Debt, you missed an intense debate. I wasn't feeling Robinson by the end of the book. I strongly disagreed with a number of his views, which prompted me to write a post on the discussion board sub-titled, I do not cry for Africa, which should be in our archives somewhere. Should I run the risk of being ticked completely off again? Not a question I take lightly.

Before I read The Debt, I held the conviction I didn't like reading essay/opinion books. It's like this; after listening to someone express their observations for a number of hours (the time it takes me to read the book, article, etc) I felt the author should pay attention to what I have to say concerning his views, reciprocate. It's only fair. After having read a few essay/opinion books, I felt like a kettle that couldn't release its steam. It's definitely a one-sided, shut-up-and-listen-to-me type of thing; an offense to the illusion that I'm grown. *smile* Oddly enough, after reading The Debt, my resolve on reading essay/opinion books weakened. True, I don't read books of this genre frequently, but I have read more than I had previously. Again, with an eyebrow arched, I reached for a Randall Robinson book. I wasn't disappointed, or pissed off, or had to fight the urge to climb upon my soapbox and sprout off an opposing position.

The Reckoning is the perfect example of what makes a non-fiction book a popular read. It's not academically dry or bloated with indigestible statistics. Robinson isn't condescending nor does his solidly constructed arguments possess a superior tone. The book unfolds smoothly, lyrically, with the richness of an impassioned novel. I loved the narrative. The book is told from the perspective of one (Robinson) who has just become aware of the pink elephant that’s sitting on the sofa by the door in his living room. It took a fair amount of courage for Robinson to admit, or even be open to the possibility of the faultiness on various outlooks in regards to blacks that didn't or haven't lived in the same socio-economical environment as he. I'll beat you to the punch, "Well, of course he did Thumper, there wouldn't have been a book if he didn't." Yeah, whatever *rolling my eyes* *LOL*

I can't say that I disagreed with all of Robinson's preconceived notions, for I held the same ones. For example, there were moments in the book, as PeeWee told his story, that Robinson, and I, doubted the story's validity. I thought, Ah naw PeeWee, you tellin' me a tale. Immediately afterward, Robinson would provide evidence that PeeWee spoke the truth. Cracked my face. Goes to show that I, nor Robinson, know everything concerning the black community, and what could, and probably did or didn't happen inside it.

The Reckoning is an eye opening, thought provoking analysis of a black community that is often misunderstood, ignored or the product of ridicule, told through the life stories of two men that are labeled as criminals, undesirables in the eyes of American society; firmly stating that it's not just a segment or portion of the black community that it is endanger of feeding upon itself, but the entire black community despite socio-economical status of some and denial of others. An excellent read.

Read Plume’s description of The Reckoning.