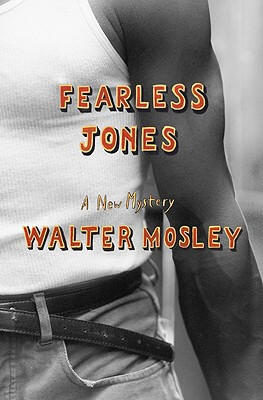 Read a Description of Fearless Jones

After 5 years, Walter Mosley has returned to the mystery scene with a new pair of crime solvers for his novel Fearless Jones. It's as if Mosley had never said goodbye to mystery writing. The humor, the fast paced timing, the likable characters, the setting, the Mosley trademarks are alive, well and eating a double cheeseburger with everything on it with a side order of fries, in Fearless Jones. After reading Fearless Jones, I want a Fearless Jones as my friend too!

Paris Minton, a proud black man who owns a used bookstore in 1950 Los Angeles, tells Fearless Jones. Paris is content with his life. He loves to read, he's a property owner, although he's not rolling in the dough, he’s getting along all right. Paris is building his future sure and strong, he can almost touch his dreams becoming reality. He's on his way. One day when a beautiful woman walks into his store asking a simple question, his dreams, his foundation, his everything is destroyed. In one day, Paris makes love to a beautiful woman, looses his car, and his store is burnt to the ground. It sounds like a country song doesn't it? *smile* The only thing missing is Paris losing his dog, but he doesn't have one. What's that old saying, if it wasn't for bad luck; I'll have no luck at all. Paris is not a happy camper, not by a long shot. Paris wants to find out who burned down his store, took away his sense of self and in order to do this he needs the help of his friend, Fearless Jones, who happens to be sitting in jail for felony assault on three men who cheated him. Paris has a couple of issues with his friend Fearless. Fearless is always in trouble, he's loyal to a fault, and he's not scared of any living thing on God's green earth. The two friends set out to discover the one responsible for the burning of Paris' bookstore and along the way find themselves surrounded by dead bodies and keeping one step ahead of the LAPD.

I loved Fearless Jones. I thought the book was TIGHT! The relationship between Paris and Fearless is like two halves of a whole. I hated for the book to end. I really did. So completely was Fearless and Paris developed that I didn't compare or think of Easy and Mouse. Which is an accomplishment if you all are aware of my love for Mouse. In Paris, I see myself. I'm not as even tempered as Paris, but I strongly identified with him. And Fearless’Fearless is a character all his own. Fearless is the kind of man that you could leave puppies and babies in his care without a worry. Fearless is also not to be trifled with, he will get in your face, and be ready to throw hands, knife, guns, whatever is handy. I like that. I love the fact that Mosley's principals characters are men that either I was raised by or men that I have no problem believing that they really existed. It's refreshing.

Fearless Jones also reunited me with a character that I didn't realize I had missed, 1950s Los Angeles. Mosley had so created the Los Angeles black community, during the 50s, in his Easy Rawlins novels, that it slowly came to me, while reading Fearless Jones, that I missed it. It was like putting on my leather coat in the new fall and being relieved that it still fit and it's as warm as I remembered. It was good to return to Los Angeles, circa 1950.

Fearless Jones is all of that and then some! I loved the book! Naturally, I highly recommend it. It establishes Mosley as one of the best authors alive. He gets better with age. I wish he could live forever’and write. *smile*