Book Review: Be Careful What You Pray For (Reverend Curtis Black #7) 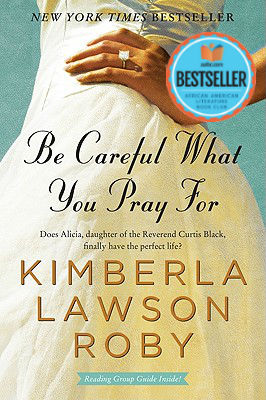 It has been a few years since I have read a book by Kimberla Lawson Roby. I decided to break that trend and read her latest novel, Be Careful What You Pray For. Upon reading the first few pages, I immediately got a sense of Déjà vu. The last novel I read by Roby was Casting the First Stone. The new novel picks up with the same type of characters. The story has the same theme. Be Careful What You Pray For deals with a preacher's ambition, his weaknesses and whether his wife can take the abuse. As far as the novel goes, I'm afraid the bad outweigh the good by a couple of pounds.

Alicia Black, the daughter of Rev. Curtis Black, from Casting the First Stone, marries and begins a new life with the Rev. JT Valentine. Alicia is closing an embarrassing and humiliating chapter in her life: her first husband Phillip, a preacher, divorced Alicia when her affair with Levi, a drug dealer, became public knowledge. Today is a new day, Alicia has changed her life. She has a new love, a new husband, and has finished writing her first novel and is in the process of getting it published. There's a threat of rain on Alicia's parade. Despite hearing rumors and rumblings about JT's philandering ways and the cloud of mystery hanging over the death of JT's first wife Michelle; Alicia refuses to allow any seeds of doubt ruin her new marriage.

Rev. JT Valentine doesn't view his marriage in the same light as Alicia. JT has dreams. He wants his already 5000 plus members congregation to grow even larger; crack the TV market; author bestselling books; in other words, become a younger version of Rev. Curtis Black, Alicia's father. JT's method in accomplishing this goal is by marrying the daughter of Rev. Curtis Black. JT has a few issues. He cannot deny himself the pleasure of the flesh, from as many different women as possible. JT grand scheme is not coming together as he had hoped. He can only juggle so many balls in the air before one slip brings all of the balls down around his head.

I haven't missed a thing since Casting the First Stone all those years ago. Roby's storytelling style has not changed. Unfortunately I am not a fan of her writing style. Here's why: all stories have a rise, a peak (or climax) and then a decline. Roby's novels tend to have a slow looooooong rise, the peak (when the shit hits the fan), then the END of the book. With Roby, there is no chance in seeing the characters deal with the fallout because a few pages later, the book ends. I feel shortchanged.

The characters are OK, but nothing to write home about. Alicia is not that deep or fascinating. Although she did briefly catch my interest when she revisited her past with Phillip and Levi; I wondered when Alicia was finally going to buy a vowel and get a clue about JT. I had memories of when I read Casting the First Stone in which Alicia's mother, Tanya, was going through the same situation with Curtis. I was bored then. I'm bored now. Truthfully, the only difference I see between these two novels is that the names of the characters have changed.

The character JT is confusing, silly, and idiotic. His actions, motivations, were either contradictory or did not make a lick of sense. When it was revealed that JT was a pimp of a high class call girl service, I was struck speechless. Throughout the book he allows his mistresses to push him around, tell him what to do, and blackmail him. Nonsense! Obviously, Roby does not know the type of mental makeup a person has to possess in order to become a pimp. The foundation of a pimp is that he believes he KNOWS the true nature of women in order to manipulate them to get what he wants. No pimp worth his salt would ever, EVER, allow any woman to tell him what to do, no less blackmail him. If Roby had created a realistic pimp and put him in JT's place, this book might have stood a chance of me liking it.

On a positive note; I was extremely happy that Roby had mastered the short chapter. I am a firm believer that if an author wants his story to have a fast paced, have plenty of short chapters in it. I was able to get through the Be Careful What You Pray For quickly, if not altogether painlessly. I am grateful.

Lastly, the dialogue in the novel grated on my last good nerve. The characters voices did not possess any individual qualities which would have allowed me to be able to distinguish one character from another. I can't. All of the characters sound the same, as if they're dialogue came straight from a college mechanical engineering project report.

Be Careful What You Pray For will be the last Roby novel I read for awhile. Stories of philandering preachers and women going out of their way to stay in the dark just don't do it for me.

Read Amistad’s description of Be Careful What You Pray For (Reverend Curtis Black #7).