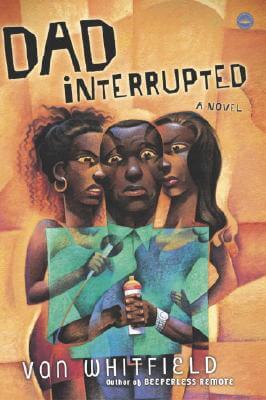 Read a Description of Dad Interrupted: A Novel

Van Whitfield has made me a happy man with his new novel, Dad Interrupted because Shawn Wayne is back in the house! I am crazy about Shawn Wayne. I am not a big fan of sequel novels, mainly because many authors do not know when to put a period on a storyline and allow their characters to give up the ghosts, but another literary outing of Shawn Wayne is too good to be true. I was squealing like a pig in a field full of truffles. In Dad Interrupted, Shawn is coming to grip with impending fatherhood, reexamining his past, his present and his future with hilarious and often insightful thoughts. Although I had to take away a few points away from the novel, Dad Interrupted is a funny, solidly entertaining novel.

Dad Interrupted begin right where Beeperless Remote ended. Shawn Wayne's life could not be any better than it is right now. Everything has fallen into place, the job is good, and he is in a loving relationship with his new girlfriend Dawn. Then Shawn gets a voice mail message from his old girlfriend Troi who announces that she is pregnant and is coming back to town. With one single message Shawn's world has been thrown up in the air and has landed on its head. Whether he wants it or not, Shawn is about to become somebody's Dad and his life will never be the same again.

I like Dad Interrupted a lot. Of course the biggest plus of the novel is Shawn Wayne. In Shawn Wayne, Whitfield has created an unforgettable character. Shawn Wayne belongs in the same company as Langston Hughes' Jesse B. Semple (Simple). Both characters possess the same innocent, na’vet’, which gives them a unique view of life that on the surface poignant, sharp and humorous. Shawn is a character who Whitfield can place in any situation and allow Shawn to be Shawn, i.e. Shawn Goes to the Grocery Store, Shawn Joins the Army, or Shawn Baby-sits Be Be Kids. In this aspect, Dad Interrupted is a literary equivalent of a situation comedy show titled Shawn Has a Baby. As with any well written comedy series episode, Dad Interrupted has the laughs and serious social commentary, as well as the tender, heart rendering moments, centered on a likable character.

Whitfield was not content in maintaining the Shawn Wayne I got to know in Beeperless Remote. In the novel, Whitfield further developed Shawn's character by incorporating Shawn's childhood and his relationship with his parents. I did not mind that Shawn would reminiscence about the times he spent with his father and how he missed him. I would assume any man about to become a father for the first time would do the same. Whitfield brought another dimension to Shawn character.

As much as I liked Dad Interrupted, all was not lollipops and sugar plums in Oz. There were a couple of things about the novel that got on my nerves. One of them being Shawn's preaching about the evils of fathers not actively raising their children. What got me was that in almost every chapter Shawn would go on and on about absentee fathers and the children they leave behind. I wanted to knock on his forehead a couple of times and say, "Shawn, I got it dawg. You can move on now, because you're preaching to the choir." All of Shawn's preaching slowed the pace of the novel; therefore, the book did not have that same lightening quick comic timing that made Beeperless Remote unforgettable.

As I stated earlier, Dad Interrupted began where Beeperless Remote ended. I do not have a problem with this, actually, I prefer it. The problem is that Whitfield did not take into account that 7 years had passed between the edition of Beeperless Remote I read and Dad Interrupted. Instead of Dad Interrupted taking place 7 years ago--the time Beeperless Remote ended--the story's time frame has moved to present time, completely throwing off the continuity of the story. Whitfield mentions devices and events that were not available to the public or had not taken place 7 years ago. An example, at the beginning of the novel, Shawn is getting a flat screen, 42 inch plasma television. I don't think so, not almost a decade ago he wasn't. Not only were these TVs not popular at the time, its price tag was definitely more than a notion. I know this because I have been following the price of the plasma television for at least that long. Seven years ago those television were going for $40,000-$80,000. I have been waiting for the price to fall to a level my wallet could reach. If I was waiting for a cost decrease, I know Shawn, with his cheap behind, was doing the same. While every time Whitfield mentioned something that could not have happened that many years ago did not take away all the enjoyment I got from the novel, these incidents interrupted the flow of the story like speed bumps in a parking lot.

Dad Interrupted was a pleasant read. It was good having Shawn back and sharing a few laughs. It was also good having Whitfield back on the playground. I miss laughing and giggling while reading a novel. Dad Interrupted is a breath of fresh air.