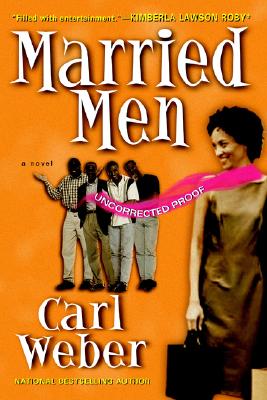 Read a Description of Married Men

Savvy, smart Kyle runs a booming African American beauty supply business, but his main job is hiding his wife from

Talk about a Calgon-take-me-away book!! Married Men, the latest book by Carl Weber, is what my friend would call an ass-wiper. Married Men is loaded with drama, pure-de-drama, and unfiltered drama. See, now, this is what I’m talkin’ about, a book that takes me away and puts me smack dab in the middle of some interesting mess! Married Men is a big book, 360 pages that I sped through in a 24-hour period. I fell into those why-are-you-talking-to-me; can’t-you-see-that-I’m-busy; I’ll-give-it-10-more-minute moods while I read Married Men. Or, as they use to say back in the day, Married Men is a bona fide page-turner. I like ass-wiper better. *smile*

Married Men is a novel that revolves around four best friends Wil, Allen, Jay and Kyle and how each cope with their own individual marriages. Jay is the player in the bunch. He’s been cheating on his wife Kenya since the start of their marriage. As the Marvellettes tried to tell us those years ago, The Hunter Gets Captured By The Game. Kyle has been married the longest, then it hits him that he’s been married to a white woman all of those years. Look, don’t ask me how. Wil marriage was tight and solid, but there are always cracks and crevices in the strongest of things. Allen is a straight up Mama’s boy that despite of all the warnings that anybody with common sense would have heeded, he went there anyway and married Rose. Throw these four marriages together and the result is what Vanity would call ’a pretty mess’.

A pretty mess indeed and I loved it! The story was infectious. I felt for the characters, well, all except Jay, he shouldn’t have gotten married in the first place. The best part was the friendship between the four men. They covered for each other, dipped into the other’s business too much, basically messed up, but through it all the love that they all felt for each other was always there. By the end of the book, their bond of friendship was stronger than at the beginning of the book. I liked that.

With Married Men, Carl Weber successfully leaped over the sophomore slump. It was high drama, entertaining and FUN! I loved it!