Book Review: Blues in the Wind 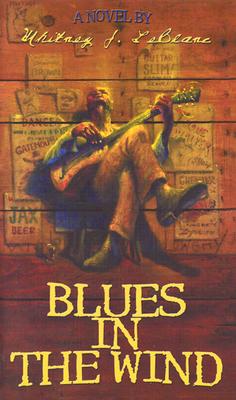 Read a Description of Blues in the Wind

Whitney LeBlanc makes his literary debut with an impressive, multidimensional, highly entertaining family drama, written in the glory of the blues. I threw open my arms and embraced Blues in the Wind like a beloved long lost relative. Finally, a family drama with some bite has arrived. Blues In The Wind is one of the best books I have read this year. A triumph.

Blues in the Wind is the story of the Fergusons, a middle class Creole family in 1930s Louisiana. The family clings to a fragile social prominence that is not easy to maintain in the depression-era south. Phillip Ferguson, who studied medicine before he married his wife Martha, is the principal of the local school for colored children. Phillip and Martha have big dreams and aspirations for their four children, but static plans have a way of becoming dynamic in undesired directions. During the next three turbulent decades the events of adultery, death, social ambition and revenge serve to unravel the Ferguson family.

I have grown tired of the pseudo-family novels under the guise of the three or four girlfriends’ novels that are sickeningly popular today in AA literature. There’s no way that friendships among three or four women can adequately substitute for a family, tied by blood, birth and time. Any novel based on relationships consisting of women and men with no parents, siblings, cousins, etc is unnatural and unrealistic. Blues In The Wind substantiated my previous stated theory: No drama is messier, or more gripping, than family drama.

LeBlanc’s well-written narrative brought Depression era Louisiana to life and transported me to a time and place I can only access via my imagination. I was able to breathe in the wet humidity on a hot windless day, feel the dust on my perspiring skin in the merciless summer heat, and smell the spicy aroma from food cooking in juke joints that intermingled with the sounds of the blues coming from a makeshift stage. The novel flowed like a stream, ever mindful of the significant historical events that influenced the Fergusons’ lives.

LeBlanc excellently established the Ferguson family including their background, and the mindsets of the young Phillip and Martha, and their children. Each of the children possessed a unique identity and endured separate fates. The children were rivers that fed into the ocean of their parents. The Ferguson family inhaled and exhaled as a collective living being.

In Phillip, LeBlanc created an intelligent, educated, principled, and prideful black man, who walked the delicate tight rope of surviving while upholding his dignity. LeBlanc beautifully illustrated Phillip’s being trapped by his own respectability, social standing and dying marriage. I appreciated Phillip’s faults. He is a strong black male character without the red cape and theme music.

Martha Ferguson is the most complex and interesting character in the novel. She reminded me of other great southern female central characters created by William Faulkner, Tennessee Williams, and Flannery O’ Conner. Martha has to confront demons she no longer has a tight rein on. Through Martha, LeBlanc demonstrated the destructive nature of racial self-hatred. Her attempts to control her family by any means are both disheartening and fascinating. Martha captured my imagination, and when she wasn’t on the page, I wondered where she was.

The author employed a brilliant narrative that anchored the story in the rhythm, melody, and nuances of a blues song. I was wrapped in shroud scented with heartache, betrayal, passion, humor and love — all evoked from a life of living the blues.

Blues In The Wind is a testament of how a novel can weave the compelling threads of history, fiction and social interaction into a powerful story. It is a remarkable, unforgettable work of art.

Shadows of the Blues by Whitney J. Leblanc - Reviewed by Emanuel Carpenter
http://aalbc.com/reviews/shadows_of_the_blues.htm

Read To Be Determined’s description of Blues in the Wind.