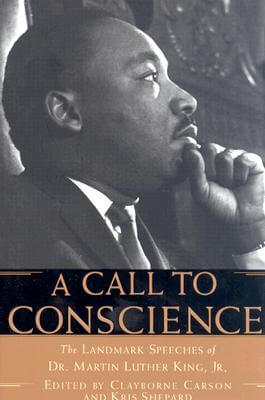 Read a Description of A Call to Conscience: The Landmark Speeches of Dr. Martin Luther King, Jr.

A Call To Conscience: The Landmark Speeches of Dr. Martin Luther King, Jr is an excellent book that should serve as a wonderful introduction to the writings of Dr. King. Composed of his most famous speeches, A Call To Conscience not only serve as the latest edition of his speeches, it successfully brings Dr. King from martyrdom to a reachable, once walked the earth, man. I suspect that there are volumes of Dr. King speeches, leather bound with gold on the edges of the pages, in libraries around the world that are used as dust catchers or devices that serve only to impress the individuals who casually examine the books on shelves during mind wanderings and impatient waiting. A Call To Conscience is a book meant to be read, savored, and pondered and to inspire.

The difference between A Call To Conscience and previous editions of Dr. King’s speeches are the introduction to the speeches. Friends and colleagues of Dr. King, ranging from Andrew Young to Aretha and Erma Franklin, relay their particular memories and thoughts of Dr. King which introduce each speech. These musings brought Dr. King and his words down to earth, stripping away the loftiness of divinity while adding poignancy, power, truth and attainability to his speeches.

Reading A Call To Conscience was an awakening. I did not realize that I had taken Dr. King and his work for granted. I saw the news clips; I’ve seen the movies. Every January and February, we sing his praises and anticipate March with the ’I can't wait for spring’ ruminations. Dr. King is then placed on the shelf until next January-February. I stand guilty. I have seen old news footage of Dr. King giving the ’I Have A Dream’ speech; I think I fell asleep on it, and a small portion of the ’I’ve Been To The Mountaintop’ speech, only the ending. I do not recall reading those two speeches or any speech written by Dr. King. I was surprised, literally blown away when I did. The speeches, the written words, are phenomenal, concrete evidence of the peaceful, harmonic co-habitation of a passionate activist, an intellectual, an observer, and a poet.

A few of the speeches are in the form of a transcript, peppered with validation and encouragement from the audience. The speeches that were given in churches were the most enjoyable and comfortable, with the ’Amen’s and ’That’s right’s sprinkled throughout the speeches. I had no trouble hearing Dr. King’s enunciation, tone, diction or seeing his movements or gestures. Anyone that has spent any amount of time in a black Baptist church can see and hear the same imaginings. I could not help but be emotionally moved.

The speeches, these words weren’t written just for the folk in Montgomery, Alabama in 1955 when Rosa Park decline to surrender her bus seat to a white man, or for the folks in Oslo, Norway who heard the Nobel Peace Prize acceptance speech in 1964; these words had us, the future generation, in mind as well.