Book Review: In My Father’s House: A Novel 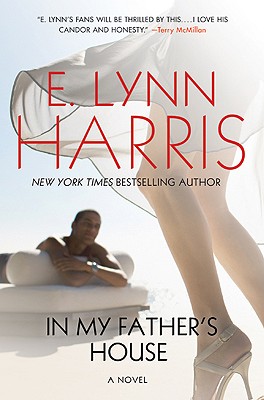 Read a Description of In My Father’s House: A Novel

In My Father’s House is the first installment to a new series the late E. Lynn Harris was working on at the time of his death. I don’t know if this novel will go down in history as a defining moment in his legacy or not. I doubt it. Whatever hopes I had of it generating any excitement in me like the Juneteenth novel in progress that Ralph Ellison was working on when he died or The Cross of Redemption, the uncollected writings of James Baldwin, was completely and utterly dashed! While In My Father’s House had some of the old sparkle that made Harris earlier novels the talk of the town, it’s not enough to save this rehash of the Raymond Tyler-Basil Henderson relationship where only the names have changed. The novel is sort of like trying on the old high school letter sweater that is found in the middle of cleaning out a basement or an attic. The sweater is tried on, memories are relived and then it’s put away again because despite all of the memories that the sweater evokes, it doesn’t fit. So goes, In My Father’s House, it simply doesn’t fit anymore.

Bentley Dean, lll had a good life. He was engaged to marry the beautiful, ambitious Kim Boston. Kim was on the same social level as Bentley; she went to all of the right schools, belonged to all of the right groups, had the right pedigree and was working for the Governor of Michigan. She was the ideal mate for the upper echelon of black bourgeois crown prince of Detroit Bentley. But-yeah there is a "but"-Bentley was in love with a man, Warren Stubbs, ex football player, now sport broadcaster. Bentley left Kim for Warren, came out of the closet, only to be disowned by his father, the powerful Bentley Dean, ll. Bentley leaves Detroit, becomes a model, and eventually moves to Miami where he is the co-owner of Picture-Perfect modeling agency. Bentley’s life will take a drastic turn for the worse when he is approached to supply models for an upcoming, highly exclusive event. Bentley’s gets more than he could have ever bargained for.

I am having mixed reactions to In My Father’s House. It was indicated that the novel was to be the beginning of a new series and it shows. There were segments of the story that begged to be further developed. It frustrated the hell out of me. There are episodes-a potential murder, a model’s disappearance-that I wished Harris would have provided more detail; thereby, enriching the story. Harris held back, as if he did not want to shoot his wad too soon. It seem to me that although a novel may be part of a series of novels, it should be able to stand on its own as a solid novel.

Harris has never been known to walk on the wild side with any of his books. With this novel, Harris was a little grittier than in any of his previous works. I was getting excited thinking Harris was going to evolve, only to have my exhilaration thrown out a car window like an empty pop can. Harris took the story to the edge, where the story crosses over from being nice to violent and sprinkled with humor; but he did not take the plunge. I thought he was going where Eric Jerome Dickey is now living or Elmore Leonard. I thought wrong. He took it to the edge and hurried back to familiar territory. He kept the story on the bright and breezy side. It’s a shame too, because Harris had gold here and he had the skills to have pulled it off.

I have one more thing to mention that pissed me off about this book then I’m going to leave it alone. The book is titled In My Father’s House, but Bentley’s father doesn’t appear in the story till the end of the book. I assumed, by the title, that the novel was about Bentley’s relationship with his father, but that’s not what I got. What I got was Bentley missing his father, reliving memories of his father or debating with himself if he should call his father or not. Come on now! I wanted to shout to Harris, man either bust the nut or get up and put your clothes back on!

I have a feeling that In My Father’s House is not the last novel to come from Harris. Despite the title, the series could have been a new stepping stone, a path in a new direction. There were moments in the novel where the shine of the old E. Lynn Harris appeared. I got briefly nostalgic. But a moment of shine here and there was not enough to save this book.

Read Palgrave Macmillan’s description of In My Father’s House: A Novel.