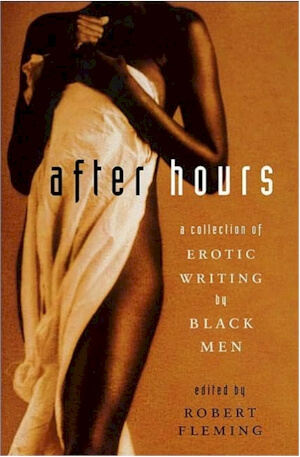 After Hours hits the ground running and maintains its level of excellence from cover to cover. It includes Charles Johnson's Cultural Relativity, which had a surprising and humorous ending; Odell by John A. Williams, one of my favorite authors of all time; Arthur Flowers' (Another Good Loving Blues) Once Upon A Time, a tale that unfolds like a whispered melody sung with the rhythm of a beating heart; Alexs D. Pate's The Rumor, a haunting and poignant tale which placed me in the middle of an organized chaotic mind; and Jervey Tervalon (Dead Above Ground) sent me over-the-top with Twisted.

There are other stories and authors I would like to briefly mention. The Roses Are Beautiful, But The Thorns Are So Sharp, written by Kalamu Ya Salaam, is the third short story that I've read by the author. I am beyond impressed. I am ecstatic. Maybe, hopefully, Kalamu Ya Salaam will one day honor us with a novel or a short story collection of his own. If, or when, he does I plan on being there, napkin tied around my neck, a fork in one hand and a knife in the other, and possessing my most ravenous appetite.

Earlier I stated that a component of a worthwhile anthology was the introduction of authors I had not read before, After Hours does not fail me on this tip. Three authors: Cole Riley (If It Makes You Happy), Bobby Adams (Where Strangers Meet) and Eric E. Pete (Cayenne) are dripping with promise and potential. I loved their stories and the comfortable, easy style they embodied. Although I've heard of Gary Phillips and Brandon Massey before, I hadn't read any of their previous work. But after reading their stories (Wild Thang, and The Question, respectively) it is an error I soon hope to correct.

I am indebted to this collection for my first Clarence Major reading experience, with the inclusion of Anita, an excerpt of Major's novel All-Night Visitor. Within seconds of reading the first paragraph, my ears perked up. Not only did I ask myself, who is this man? I also posed the question, how did I go so long without reading ANYTHING written by him? Clarence Major has to be the best well-kept secret in literature today. I was so moved -- Anita struck such a cord -- that I immediately read Major's new book, Come By Here: My Mother's Life (which was AMAZING!!), upon finishing After Hours.

But, there's a small puffy gray cloud hovering about this anthology, (as the song said, into each life a little rain must fall). The following three tales left a few mud puddles in the otherwise picture-perfect After Hours. The Apostle Charles by Tracy Grant was too wordy and cumbersome; Home Alone by Curtis Bunn made me wish that the story would have left me alone; Wallbanging by Brian Egeston...uh...NO, this story couldn't fly if it had two sets of wings and a first class ticket on the Concord jet.