Book Review: A Conversation with the Mann 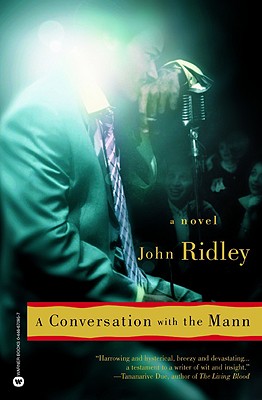 Read a Description of A Conversation with the Mann

Not since Ralph Ellison’s Invisible Man has a first person narrative novel struck me with such a poignant sense of completeness and satisfaction as John Ridley’s new book, Conversation With The Mann. Similar to E. L. Doctorow’s Ragtime, or the novels of John Williams, Conversation With The Mann merges fiction and historical events so seamlessly oftentimes I forgot that the title character’s life was fictional. The novel is phenomenal and should establish John Ridley as a master of his craft.

Conversation With The Mann is based on the life of a young, up-and-coming black comedian, Jackie Mann, during the "golden age" of television, and the threshold of the Civil Rights movement. Jackie states early on that he wasn’t a "has been" — he was a "never was". Jackie relates his life story beginning with his abusive childhood at the hands of his father, the early death of his mother, and his rise as a top dollar comic on the club circuit. During this time, despite the fact that he hobnobbed with the likes of Frank Sinatra and Sammy Davis, Jr. his own life was an endless exercise of tiptoeing through political and personal minefields.

The character of Jackie Mann is exquisitely constructed as a subtle and complex character. Ridley did not create Jackie Mann, as much as he "birthed" him. Ridley brings to life Jackie’s conflicts with the growing civil rights movement and his role in it, the integrity of his comedy, and his driving need to succeed. Jackie’s inner turmoil was revealed gradually. His mental and emotional discord almost went without notice before I found myself knee deep in the muck of Jackie’s troubled mind. It was as if I had been drinking Long Island Ice Teas all night and didn’t realize I was drunk until I attempted to stand.

I understood, and at times sympathized with Jackie being influenced by his abusive, co-dependent relationship with his father, and how this abuse became ingrained in the foundation of his personality. It affected the way he conducted his love life, his experience of racism, how he expressed his manhood, and his very sense of himself.

Conversation With The Mann unfolds as a typical celebrity autobiography and it is written with the distinctive voice of someone who has spent his life lusting after the sounds of approval that can only come from an audience. I felt at times that Jackie wasn’t telling me the whole truth, as I did when I read Aretha Franklin’s and Sammy Davis, Jr.’s autobiographies, indicating Ridley’s writing mastery in being able to communicate this feeling of holding something back. But again it would come to me, that Jackie Mann is not real. He ain’t got no privacy worth protecting.

Conversation With The Mann is a remarkable book. The lines between fiction and history weren’t blurred, as much as erased. Ridley brings to life a character so unforgettable, I kept forgetting that he wasn’t real. The author presents Jackie’s anxieties, emotions, and thinking, in a similar way to how a surgeon exposes layers of vital organs. Ridley accomplishes it a light touch. The man got skills.

In the Introduction to Conversation With The Mann, Ridley writes that it took him 10 years to write this novel. I will gladly wait another 10 years for a novel of this caliber, although I would prefer to wait only two years. (I could even settle for five). Conversation With the Mann is a wonderful achievement.

Read Warner Books’s description of A Conversation with the Mann.