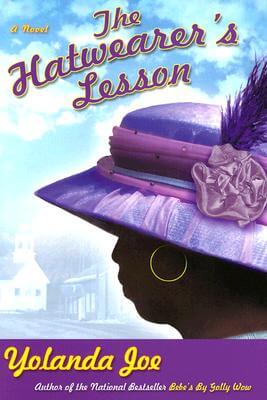 Read a Description of The Hatwearer’s Lesson

I am perplexed. Maybe someone -- anyone, can help me. I'm trying to figure out what happened between BeBe's By Golly Wow, the last Yolanda Joe book I read, and The Hatwearer's Lesson, Joe's latest novel. BeBe's By Golly Wow is a fun, feel-good novel. The Hatwearer's Lesson is basically a warming up of the leftover elements from books that became popular in the eighties: over-achieving African-American woman receives an invaluable life lesson from her old, wise, face-cracking, blunt-but-loving grandmother. Yawn. Been there. Done that. Sold it in a yard sale ten years ago. I'm disappointed in The Hatwearer's Lesson, not only because the book is tired, but also because Yolanda Joe has done better.

Terri Mills is an up-and-coming lawyer living in Chicago. Life is good. Her engagement to fianc’ Derek -- a handsome, rising-star, legal eagle -- is also a feather in her cap. Of course, all is not well in Oz, as is indicated when Terri's Grandma Ollie attempts to write Terri's engagement in the family Bible and finds that she is unable to Derek's name in the book. Possessor of a sixth sense, and a firm believer in signs, Grandma Ollie knows something is going to happen that will change her granddaughter's life forever. Terri will soon come to realize that everything that looks good to you ain't necessarily good for you.

There's nothing surprising or fresh about The Hatwearer's Lesson. I found myself losing interest in the book after I read the second chapter. I knew where Joe was going to take me. I simply wasn't impressed. There are only so many times I can visit the same theme (affluent AA woman dumps dog of a man for the real love of a real man, yadda, yadda, yadda) over and over again before I loose all interest. My fascination with this theme has been long gone. When B.B. King sang that the thrill was gone, he ain't said nothing but the truth.

The Hatwearer's Lesson is a half-written book. The plots and characters are not fully developed. It's as if Joe was in a rush to churn out a book out and just threw anything out here. Unbeknownst to author Joe, I take my books the same way I take my steaks: well done.

The characters were incomplete and sketchy at best. There was nothing extraordinary or remotely captivating about Terri. She's boring. I could not generate a mind's eye image of Terri. Grandma Ollie was every bit as beguiling, humorous and entertaining as she was intended to be. But Terri was just there...in the way of Grandma Ollie and the story she was trying to tell.

The main plot, Terri's romantic dilemma, was unimaginative and not worth rehashing. But, the subplot that featured Grandma Ollie's young years, getting and losing her first love Hank, and how she met and married her husband Wesley, is the storyline on which Joe should have centered this novel. I loved it. I hated the moments when Grandma Ollie's youth wasn't front and center. If Joe had shifted the spotlight from Terri to Grandma Ollie, and paid more attention to details in Grandma Ollie's past, The Hatwearer's Lesson might have been a winner.

The only problem I have with Grandma Ollie is there's nothing original or unique about her than any of the other two billion wise old grandmother figures that have been sprinkled throughout African-American commercial fiction over the past twenty years. It did cause me to ponder how intelligent, knowledgeable, women characters, such as Grandma Ollie, raise dim-witted women like Terri. I don't get it. Intellectually, I know that without the stupid female characters, there would be no novels like The Hatwearer's Lesson and others of this ilk. But, come on, isn't it about time to find out? Life is a whole series of conflicts and tragedies, which can be the souls for worthwhile books. Can't writers provide us with novels that have interesting characters that duck and dodge the slings and arrows that life shoots at us versus novels that revolve around characters' blatant lack of common sense? I believe so. I've read too many novels, this year, to know better: A Man Most Worthy by Marcus Major, Chocolate Sangria by Tracy Price-Thompson, and And On The Eighth Day She Rested by J. D. Mason, to name a few. This row been hoed, it's time to move up field.

The Hatwearer's Lesson is patchy. In a couple of spots the book is mildly entertaining. But, a few raindrops don't make a thunderstorm. The rest of the book is lacking. While reading it, I kept imagining what other book I could have been reading, but wasn't. Not a good sign. I was half fulfilled, half disgusted, and totally relieved when I finished The Hatwearer's Lesson. I didn't anticipate this type of novel from Joe, I expected better.