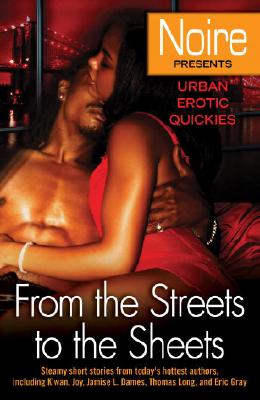 The best story in the anthology was by Noire, That Bitch Juicy. That Bitch Juicy is an addendum to Noire's first novel, G-Spot.  Monique, a stripper at the G-Spot, is there at the strip club when Juicy, the main character in the G-Spot, is being tortured, beaten, and gang raped as punishment for sleeping with G's (the owner of G-Spot strip club) son Gino.  Since I was familiar with how the story went down, That Bitch Juicy was pure gravy on the whole G-Spot reading experience.  Noire does what Noire does best by keeping the sex hot, the violence real and the story gripping.  Noire is da bomb!

Noire was not alone in giving me a good story.  That Bitch Juicy was followed by a wonderful story, Ain't Nuthin’ Sweet by Plea$ure.  Ain't Nuthin’ Sweet starts off with a bang literally, and ends with one.  I LOVED IT!  Sweet is a club owner who does a little of this and that in order to keep the money coming in.  The story opens with Sweet catching her main squeeze Whisky with another woman and blows the woman's back out with a pistol.  Things go all wrong for Sweet after that and she gets caught with her pants down.  The story is all that and then some.  When Plea$ure drops her first novel, I am going to be one first in line to read it.

I had heard of Jamise L. Dames.  I had seen a few of her books but was not inclined to read any of them because the book summaries didn't move me, a mistake on my part.  Dames's story Charge It to the Game is awesome!  I couldn't get enough of it.  Flame is kidnapped by Power’s, her boyfriend, drug supplier because Power cheated him on a deal.  Power has to make it up to his drug supplier or Flame will be extinguished.  Naturally, things don't go as planned; Power betrays Flame and now Flame has to save Flame, and she does it beautifully.  I loved the story!  After reading Charge It to the Game, I openly admit that my earlier impression of Dames's writing skills were wrong.  With this story, Dames have made a believer out of me.

Pretty MF by Gerald K. Malcom was the freakiest story in the collection.  I'm not going to elaborate but trust me, it's freaky.  I was dumbstruck reading it.  I use to think that I had heard everything, but I hadn’t.  Ayeesha by Erick S. Gray was a good, urban erotica with a bit of Twilight Zone thrown in.  Grimier by Eufitis Emory was a good story, as well as Thug Lovin’ by Andrea Blackstone.  The majority of the collection is above board good.

However, there were a couple of stories, Noire should have left alone: Homey, Lover, Friend by Thomas Long and Life of Sin by Joy.  Both of these stories were stiff, unimaginative and should have come with an attached sofa because the stories were tired and needed to lie down somewhere.  I do not consider myself an avid fan of urban erotica-not even a little bit-but damn, even I have read a few stories that were strikingly similar in narrative and plot to these two.  If the plot lines are not original, can they at least make them interesting to read?  Is that asking too much?  I don't believe so.

Although I loved the collection, I have one complaint in general concerning most of the stories in this collection.   The main female characters in the stories were either strippers, ex strippers or wanna be strippers.  What's up with that?  *eyebrow raised* Are strippers the only women who have libidos or love having sex?  I would think that at least one of the authors would go out on an original tip and have a female character drive a bus, or be a frustrated housewife or anyone other than a stripper.

Noire presents from the Streets to the Sheets is a damn good collection.  Since it carries Noire's name, I expected nothing less.