Book Review: Fire in a Canebrake: The Last Mass Lynching in America 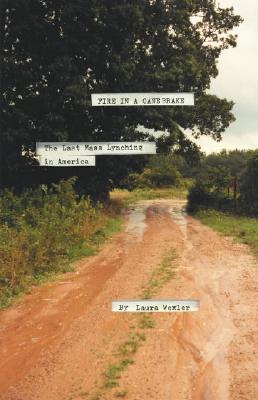 Read a Description of Fire in a Canebrake: The Last Mass Lynching in America

"'If all it's going to do is stir up old memories, it can't do anything but hurt folks. Who wants to talk about Nagasaki and Hiroshima? Who wants to talk about Dachau?" he [Marvin Sorrells, Walton County's senior superior court judge] says. "Well, probably those things need to be kept alive, but this thing, I don't see anything positive to come from it."'
—Fire In A Canebrake by Laura Wexler

"This thing" Sorrells refers to is the subject of Laura Wexler's exceptional new book, Fire In A Canebrake. In a small Georgia town, two couples were lynched along the side of a road with no witnesses to the crime. The murders are considered to be the last mass lynching in America. I finished Fire In A Canebrake a couple in days ago and it is excellent!! Wexler does a remarkable job bringing this little heard episode of American history to the forefront, in living color.

In 1946, Walton County, Georgia, on a Sunday afternoon, Roger Malcom gets into a major fight in the middle of a road with his common law wife, Dorothy Dorsey, As my grandmother would say, putting all of their business out in the street. Roger accuses Dorothy of sleeping with their white landlord, Barnette Hester. Roger leaps at Dorothy and she ducks and runs across the road to Hester's, home. This fight will set off a chain of events that will conclude with the murders of Roger, Dorothy, George Dorsey (Dorothy's brother) and Mae Murray Dorsey (George's common law wife). This series of deaths will become known as the last mass lynching in America.

Fire In A Canebrake is an excellent account of this tragic event. Wexler presents a well researched, clear, concise and complete view of the mass lynching. She shows Walton County before and after the murders including the political climate of the town, state of Georgia and the country at the time of the murders. She also presents biographical details of all the major, as well as a few minor, participants. I loved the fact that Wexler provided an objective view of the murders by either verifying or contradicting the statements of eyewitnesses and those who were later called as witnesses in the subsequent hearings.

Wexler presented the case in the structure and narrative style of a novel. I love history when it is offered to me as a story because it captures and holds my interest. Wexler's writing style is pleasing to the eye and ear. She is an outstanding storyteller and she has great material to work with. We have sex, murders, conspiracies, cover-ups, and of course racial dynamics at work -- all of the components that make daytime soap operas addictive. I was especially impressed that Wexler's research and objectivity make the book scholarly and credible in the academic realm, without weighing the story down. It was a fine line to walk. Wexler did it with confidence and flair.

Of even greater interest than the nuts and bolts of the case, Wexler presents the mindset of the people who figured in the story, thereby, making Fire In A Canebrake timeless. Naturally, I was ticked off about what happened back then. Initially, I couldn't empathize with the black folks of that town. It was easy for me to judge the black folks of Walton County by saying, "I would have been gone!", or going on about how I would have cussed this or that person out. That's all well and good for me to say now, almost 60 years after the murders living up North, but I wasn't living in 1946 Walton County. After reading the book, I can better understand the life and death decision they faced on a day-to-day basis.

Considering the white townspeople's reactions to and opinions of the murders, then and now, made me start thinking about present day race relations. I believe that the real battle for racial equality today, must now take place in the minds, hearts and attitudes of white people. There is no amount of marching, screaming or singing "We Shall Overcome" black folks can do to change a mind that does not want to be changed. Here in current times, Marvin Sorrell referred to the murders as "this thing". He did not have the basic human respect for the victims to acknowledge that there were four lives that were killed, not one. There's nothing I can do with this man or his way of thinking, except to make sure that he has no influence on my life.

Fire In A Canebrake in extraordinary book about a horrendous occurrence. Laura Wexler does justice to a historic episode that should never be forgotten again.

Read Scribner’s description of Fire in a Canebrake: The Last Mass Lynching in America.