Book Review: Lay This Body Down: The 1921 Murders of Eleven Plantation Slaves 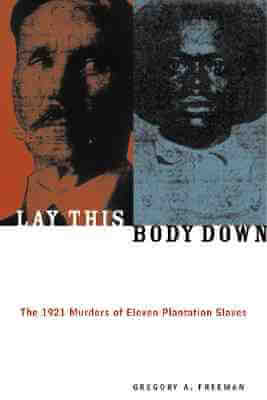 by Gregory A. Freeman

Read a Description of Lay This Body Down: The 1921 Murders of Eleven Plantation Slaves

I may have gotten my love for reading from my mother, but I got my love of a good story from my father. He was an excellent storyteller. During my years living at home, he would keep me up all night telling me stories of his childhood, and our family. I looked forward to the times when it was just the two of us. I miss those times. I miss my Daddy. One of the stories my father told me concerning his boyhood in Georgia was about seeing slaves. I didn't believe it. He said, "I tell you true, there were still slaves when I was a boy. I saw 'em." "Naw, Daddy! Slaves?" "Slaves?" I didn't buy it for a second. Now, almost 30 years after that night, I read a book that proves there were indeed slaves in 20th century America, in Georgia.

Lay This Body Down by Gregory A. Freeman is an examination of a 1921 murder case where a plantation owner and his black overseer murdered eleven men because the owner feared a federal investigation for violating an 1867 federal law making it illegal to practice peonage. Lay This Body Down is a first-rate account of a little known episode in American history. Although the book didn't have enough details for me, I was, nonetheless, enthralled.

Peonage was the 20th century version of American slavery. In Lay This Body Down, Freeman defines peonage in the third chapter titled "The River Was Full of Dead Negroes":

"The term peon, later used casually to refer to a person of low standing, originated from the Spanish peon, meaning a man indebted to an employer. In all cultures in which it has been present, peonage is a transitional phase between a legal slave culture and a more capitalist society without slavery. To make peonage work, a society needs abundant laborers who are illiterate and politically helpless, a rural environment in which most beneficiaries of the practice do not have to see its brutality, and a legal system that is willing to look the other way."

Any African-American in the South was at risk of becoming a slave.

In 1921, John S. Williams, a Georgia plantation owner, practiced peonage in order to maintain his large farm. When federal agents talked with Williams after he was accused of peonage, and he knew that he was going to be investigated, he decided to get rid of the evidence -- his slaves. Williams instructed his black overseers, (chiefly Clyde Manning), to kill the slaves, and ordered the manner of their death. After eleven black men had been executed and their bodies began to surface, Williams and Manning would face criminal charges for their murders.

Lay This Body Down is a highly readable account of an absorbing murder trial, Southern society, and the South's reluctance to part from its tradition of human bondage and depravation. I read the book in one day. Freeman did a commendable job presenting the murders, and in evoking the setting the political and social backdrop of 1920'S Georgia. I liked the structure of the book. It read and moved as if it were a novel. (This is how history should be taught -- not as regurgitation and memorization of dates, laws, and figures -- but as a series of illustrative and meaningful stories. More students would fall in love with it.) But despite these positive attributes I still was not entirely satisfied.

Because the Williams murder trial is not well known, I would have preferred more rigorous documentation of original sources or information in Lay This Body Down. The book should have sought to become the definitive record of this historic episode. Freeman states that the dialogue and descriptions were based on the transcripts from the murder trials and FBI interviews. Including excerpts of the actual transcripts of these events would have provided a more objective view of this tragic episode, and not leave me with only Freeman's interpretation to shape my understanding.

I also would have preferred that Freeman had interviewed the surviving families of the murdered men and the Williams and Manning families. Freeman did state in the epilogue that all of the major participants are dead, but surely not all of their family members are gone. Their observation and comments might have added another dimension of enlightenment.

Lay This Body Down is a fast-paced, informative, and engrossing book of an almost forgotten incident in American history.

Read Chicago Review Press’s description of Lay This Body Down: The 1921 Murders of Eleven Plantation Slaves.