Book Review: Lion’s Blood: A Novel of Slavery and Freedom in an Alternate America 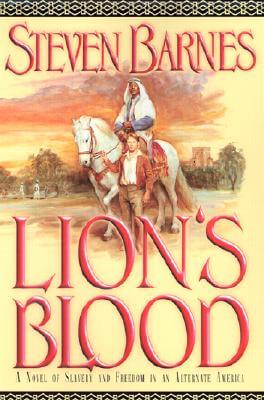 Read a Description of Lion’s Blood: A Novel of Slavery and Freedom in an Alternate America

Steven Barnes, has emerged with one of the best books of 2002, a novel that explores a "what if" question; What if the United States of America had a past where white folks were the slaves and Africans were the slave masters? Lion’s Blood: A Novel of Slavery And Freedom In An Alternate America is an epic novel of vision, adventure and the mechanical workings of a society that is based on slavery. Lion’s Blood is extraordinary and should be recognized as one of Barnes best novels to date.

In 1863, Aidan O’Dere, is a young white boy, whose village had been raided and his father killed. He, his mother Deirdre and sister Nessa are captured, subjected to the middle passage, and are enslaved by Africans living in the new continent of Bilalistan. His master’s younger son Kai befriends Aidan. As the years pass and they both mature, Kai and Aidan’s friendship undergoes a series of assaults as the reality of their master-slave relationship permeates their lives.

I loved the two main characters, Kai and Aidan. Both were sympathetic, well-constructed characters. Aidan’s struggle with being a slave and being a man, who wants to love and support his wife and family, is tangible. I could have reached out and touched his desire to be free. It brought to mind that line from The Color Purple where Sophia tells Celie, "I know what its like to want to go somewhere and can’t." Aidan’s plight is one that I recognized for it is one with which I am well familiar.

One of the beauties of the book was the depiction of slavery being not only abominable to the slaves; it was atrocious to the slave masters as well. True, Kai was the master, a member of the privileged, ruling class. He was also a slave to his social station, his father’s expectations, his future, his inheritance, his duties and his responsibilities. Kai wasn’t free to dream of who he wants to be, or love who he wants to love. Kai was trapped by his ancestry and inner turmoil of right and wrong, and personal honor.

Lion’s Blood contains qualities of epic stories such as Ben-Hur and Spartacus with great battles and romance. The novel reads like an expert retelling of an historical event. The speculative novel is well researched as it delves into what America could have been if Egypt had ruled the world. Lion’s Blood blends past cultures that actually existed — the cultures of Frank and Gaul, in addition to Arabic and Zulu. The cultures were completely represented, with their unique religions, histories, folklore, even culinary arts; I was deeply immersed in this alternative society. At times I would stop reading, because I had to figuratively come up for air.

When I started reading Lion’s Blood, I struggled. Neither the characters, nor the narrative were at fault. It took longer than a minute for me to temporarily suspend my knowledge of American history and slavery in order to allow the story to unfold as Barnes intended. It was necessary to rearrange some thangs in my head. I had to accept the notion of white folks being slaves and Africans being the masters, and North America being Bilalistan. I will acknowledge a small part of me was looking forward to witnessing the great proverbial verse "turn about is fair play" come to life, if only in a fictional setting. What I wasn’t expecting was that despite the race or ethnicity of the slaves, I disliked seeing anyone enslaved. I empathized with Aidan, cussed out Kai and the other slaveholders. I flinched at the indignities the white slaves suffered, and wished ill will to those who inflicted such pain. What struck me dumb were my feelings of empathy for Kai. The novel beautifully, poignantly illustrated the true destruction that slavery inflicts on a society. Barnes accomplished this with the wisdom and finesse of an excellent storyteller who knows the value of patience, possessing a soothing voice, and the true power of his tale.

Lion’s Blood is a magnificent novel of our past and what could have been our past. It shows the ugliness, strength and beauty of our society, as well as whispers what we could aspire to become. In his exhaustive and completely created America, Barnes wrote a realistic, magical, luxuriously rich novel that proves satisfying on technical, intellectual and emotional planes. Lion’s Blood will not be easily forgotten, nor should it be.

Read Aspect’s description of Lion’s Blood: A Novel of Slavery and Freedom in an Alternate America.