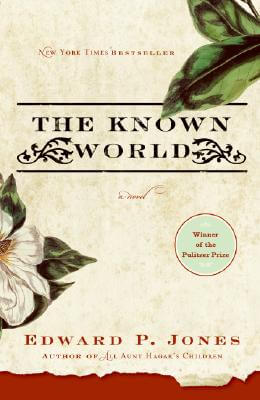 Read a Description of The Known World

As is becoming an unbreakable and pleasurable yearly excursion, I attended the 2003 Book Expo America (BEA) in Los Angeles. I love the BEA. The convention is all about books: people getting books, people giving away books, people talking about selling books, writing books, books, books, books. Every year, upon entering the main floor I fight the urge to throw my arms open and say, "All this’for lil ol' me?"

This year, I had the delight of meeting a couple of black editors from major publishing houses. One in particular, I won't use her name because I haven't asked her permission to do so, told me, "Thump, I have a book I want you to read. You're going to love it." She went behind a table and emerged with a pretty brown book. I thanked her and hurried on my way. The pretty brown book was The Known World by Edward P. Jones. Madame Editor was wrong; I did not love The Known World. What I feel for the book is beyond love. I am ecstatic, completely over the top about it!

The Known World is literary classic. The novel centers on the life of a former slave who became a slave owner. The Known World come closest to the mythical "great American novel". I could apply more adjectives to the following statement, but I'm going to keep it short, simple and sweet: The Known World is a masterpiece and a magnificent work of art.

The element of The Known World that most captured my interest was a black man ’ a former slave ’ who himself owned slaves, thus presenting a new furrow in well-plowed ground. I know that there were former slaves, who having worked to attain their freedom, worked to purchase members of their family. But the idea that a former slave, who lived through the inhumanity of slavery, was now inflicting it upon others seemed downright ugly and interesting. At first, I had a hard time wrapping my mind around this premise. I know that there are African-Americans who hate the fact that they are black and feel that they carry every stereotype of black folks (negative and positive) on their shoulders like straight jacket. So, the thought of a former slave other owning slaves became a fascinating notion. But Jones had to deliver more than one intriguing issue to produce an extraordinary novel, and in The Known World he did indeed deliver the goods.

The characters are three dimensional and possess traits that are both admirable and disgusting, which made them all the more fascinating. The characters were not tools Jones created to dramatize this human tragedy, but flesh and bone, air-breathing people. Henry, Moses (Henry's slave overseer), Caldonia (Henry's wife), William Robbins (Henry's former master and mentor), and other characters in the book, were expertly rendered.

I loved the manner in which the characters were introduced in the story by revealing their fate at the same time. For instance, when Caldonia entered the story, I was told that she was Henry's wife, who, after his death, would marry William Robbins's biracial son and have children by her second husband. Both major and minor characters received this treatment. Not only did it give the novel a Citizen Kane-like feel, but it allowed readers to experience the poignancy of knowing the character's future. The story was fuller because of this technique.

The novel had the sound and rhythm of a book written in stereophonic verse: melodic and haunting on the treble, while maintaining a steady deep pulsing resonance that flowed like warm syrup on the bass. The result is a vibrant, graceful and powerful story. It flowed so easily that I didn't realize its depth and complexity until I was figuratively buried up to my chin in it. The narrative voice was compelling, composed of one part historian, one part storyteller and one part town gossip. The beautiful poetic prose was infused with a sense of urgency. Not one word or sentence was to be missed for fear of losing an essential piece of an elaborate and intricate puzzle of a story. While the poignancy and intensity in the story was ever present, there was also freshness to it, much like cracking a window to allow a whisper of cold air into a warm room on a winter night.

The Known World has everything that renders it a classic novel: prose that flowed like melted caramel; a little known aspect of slavery that instantly captured my imagination; characters I could reach out and touch; a fully constructed world; and a seamless interweaving of the story with historical facts.

I am not quick to declare a novel a classic. A novel can best be evaluated only with the passage of time, when the heats of agendas, publisher promotion and critical reviews have faded, and what remains is the content of the book to stand on its own merit. A Known World is the exception to this rule.