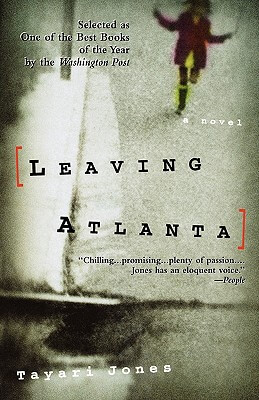 Read a Description of Leaving Atlanta

Tayari Jones enters the literary scene with Leaving Atlanta, a novel that takes place in 1979 Atlanta, Georgia during what came to be known as the Atlanta Child Murders. What a fiery debut! Tayari Jones’ first novel is as bright, luminous and brilliant as the fire General Sherman left to Atlanta as a going away present. It is magnificent!

Leaving Atlanta focuses on three children in the same fifth grade class at the Oglethorpe Elementary School. The novel is divided into three sections, with the first, "Magic Words", presenting the tale of LaTasha Baxter. LaTasha tries to fit in with the popular group of girls. Her parents are having martial problems and LaTasha is having her first crush on boy, Jashante — who later becomes missing. The second section, "The Direction Opposite of Home", features Ronald Green, a boy who is picked on and ridiculed in class. Ronald seeks his father’s love and approval, but failing that he soon discovers the solution to all of his problems. The third section is "Sweet Pea" with Octavia Fuller as the narrator. Octavia is the other class misfit due to her poverty and her dark complexion. She is beginning to see her family, her neighborhood, her mother and her absent father through maturing eyes. Using the death knell of the missing children to connect these three students, Jones creates a remarkable and haunting novel.

I loved Leaving Atlanta! But when I started the book, love was the farthest thing from my mind. The novel began with LaTasha’s section, "Magic Words", and immediately I was on edge. I wasn’t in the mood to suffer through another middle class young black girl reminiscing about a time when her hormones were out of whack — been there, done that, still paying for it on the Visa bill. However, by the middle of "Magic Words", I was won over. LaTasha soon had my complete attention as her world became increasingly complex and interesting. I then sat back, relaxed and allowed Jones to do the driving through her story.

Jones’s talent and skill rise to an even greater height in Ronald’s section, "The Opposite Direction of Home". The winds of the novel took on an unexpected chill, escorting in rolling gray storm clouds, as Ronald’s emotional pain and the child murders take turns eclipsing one another. Ronald’s story was poignantly beautiful, shadowed in the sadness of the young boy’s heartbreak. The novel could have ended with The Direction Opposite of Home and I would have been as happy as a fat cat sleeping in the sunshine on a full stomach. But fortunately, Jones wasn’t done — she was saving her best for last.

Jones hits a home run with the force of a train wreck with "Sweet Pea". This is Octavia’s story, a bittersweet dream that is edged with tears. Octavia’s young, captivating voice is trimmed with hard earned wisdom and questions of the future and she rendered me speechless. Jones totally captivated me. As I evaluated the novel as a whole, I must acknowledge Jones expert weaving in combining the stories into a lyrical musical tome, sung in 3-part harmony.

All three sections had their sole voice; its own recognizable traits and styling that were appropriate for each of its central characters. LaTasha and Ronald’s sections were written in third person. For Octavia’s story, Jones used a first person narration. Jones took a risk mixing the different narrative styles. It’s not always easy for me to switch gears when authors attempt this method of storytelling. The result is usually a big ball of confusion. But guided by Jones’s hand, the cohesiveness and rhythm of the stories were flawless.

Leaving Atlanta is a highly impressive, striking fictional debut, laced with a graceful elegance and an ear on the hearts of its characters! The novel is unforgettable!