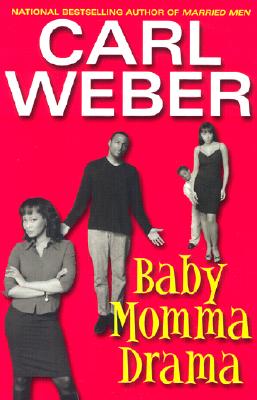 Carl Weber's new book is loaded with the type of drama I love, -- unfiltered, full strength, wig snatching, "yo-momma's-a-ho!" drama. Weber's novel features two sides of the Baby Momma/Daddy coin, but with both sides coming from a woman's point of view. The novel travels with quicksilver speed, jammed with as much commotion as can possibly fit between two cardboard covers. Baby Mama Drama is an infectious, hard to resist, harder to get off carnival ride that I wouldn't mind riding again.

Jasmine and Stephanie are sisters who play out two different perspectives of the Baby Momma Drama: the girlfriend or wife of the man that has a baby momma, and being an actual baby momma. Jasmine, a postal worker, is in love with Derrick, a convicted drug dealer serving out the reminder of his sentence. Jasmine has been serving time right along with Derrick by visiting and phoning him regularly, remaining faithful to him, and by dealing with Derrick's baby momma, Wendy. Then Dylan happens into Jasmine's life. Dylan could be Jasmine's Mr. Right, until it is revealed that Dylan is in the middle of his own baby momma drama. Jasmine can't win for losing’or can she?

Stephanie, Jasmine's little sister, has a different baby momma drama unfolding. Her live-in boyfriend, Travis, has bought her a new SUV in her favorite color, and a new house in the suburbs. Travis wants to adopt her daughter, Maleka. He is supportive of Stephanie obtaining a nursing degree, and has proposed marriage with a big diamond ring to seal the deal. Stephanie's world is so bright; I have to put on a glare shield on my computer monitor in order to type it in this review. But then Malek, Maleka's father and Stephanie's first love, re-enters the picture. Will Stephanie realize that what looks good to her, ain't necessarily good for her?

Baby Momma Drama is a good time waiting to be had. I read it and had a ball! The story was so tight; it should have a "waterproof" label sewn inside the front cover. Portions of the book were sad, comical, and honest. I giggled, laughed out loud, and called a few characters "skank" and anything else but a child of God.

The key ingredients in all of Weber's books are the characters. The cast Weber assembled for this outing did not disappoint. Jasmine and Stephanie are Weber's first female lead characters. Both women had well-developed and unique voices. I had no problem believing their motives or actions concerning the men in their lives. I didn't agree with many of them. Truth be told, most of their decisions were pretty stupid. But, since I see women do the same thing over and over and over again, in real life, on the TV court shows, Dr. Phil, and Oprah, I know Weber wasn't lying on anybody.

Weber is becoming a force to be reckoned with when it comes to writing what men think and feel. The male characters: Dylan, Travis, Malek were expertly created. Dylan and Travis shared the narration duties with Jasmine and Stephanie. I got a well-rounded view of their world, a complete picture.

My favorite character in the book was Jasmine and Stephanie's grandmother, Big Mama. Big Mama was a hoot. I wonder, what would happen if novels were written about the Big Mamas before they were Big Mamas, when they were just Mary, Adele or Phoebe? Their lives had to have been something in order for them to now be wise and fearless?

Baby Momma Drama is the third novel that I've read written by Weber. When I run into him he usually says, "Thump, if you liked that book, wait till you read my next one." He hasn't lied to me yet!