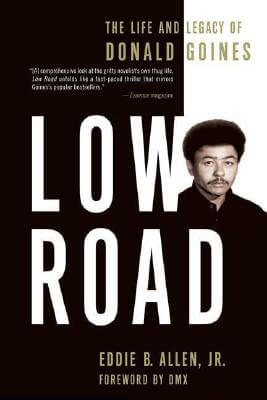 by Eddie B. Allen

Read a Description of Low Road: The Life and Legacy of Donald Goines

Donald Goines has become, decades after his death, one of the most influential African American authors in the African-American literary canon. The realism, the violence, the non-judgmental observation of the darker, seedier, we-ain’t-the-Huxtables side of African-American culture of Goines novels reflected the world where I lived and the people I knew. I love gritty, violent stories featuring amoral characters. Donald Goines’s novels and I were a perfect fit.

When Low Road: The Life and Legacy of Donald Goines written by Eddie B. Allen, Jr. crossed my desk, I was excited. Finally an opportunity to know more about an author whose life is equally as fascinating as the stories he wrote. With the rise of the hip hop culture, as well as the black reading audience in general, Goines is more popular now than at the time of his death. During the past 25 years, the 16 novels Goines wrote—at such an amazing speed while in the throes of a heroin addiction—has never been out of print, an amazing feat for any author. His novel Never Die Alone had recently been turned into a major motion picture, with others to follow. The time is ripe for a definitive biography of Donald Goines. Unfortunately, such a biography is MIA because Low Road ain’t it.

Reading Low Road was an exercise in examining my various levels of frustration. Low Road is the perfect example of how NOT to write a biography. When I hear that a biography is "definitive", I’m expecting a biography that is scholarly in its approach and presentation. Do not misunderstand me, I don’t mean that the biography has to be boring. I’m too old to be reading boring books. By scholarly, I mean exhaustive research, displaying documents in their entirety, identifying the sources of the author’s information and above all an objective narrative. In other words a history book that reads like a novel. This is where this biography fails. From its format to the narrative voice Allen used in the book, Low Road is lacking.

Let me say upfront that one of the reasons Low Road is falling short as a biography is Donald Goines. I got the impression that Allen did not have a large amount of raw material on Goines; this absence would make the writing of any biography difficult. As with any biography, there has to be something there for the biographer to research and craft a story. It would seem to me that writers would be one of the easiest subjects to write a biography on due to the paper trail they tend to leave. I have been around a few writers, and I do know that they leave a mess of writings behind in their wake: corrections, notes, poems, letters, ideas, failed projects, outlines, and projects in progress. Considering Goines lifestyle couple with the fact that he began writing so late in his life, I would not be surprised such writings do not exist.

The only unpublished Goines piece that Allen discusses, towards the end of the book, is an unpublished essay titled "Private Thoughts on a Lonely Sunday, Sept. 1, 1973". I got so mad when I read the essay I could hardly see straight. Instead of copying the essay, in its entirety and allowing me to form my own opinions of what Goines was saying Allen gives a running color commentary throughout the entire essay. Allen would print a sentence or two from the essay, and then write what Goines meant by it. I don’t need this type of crap. I get enough of it whenever Dan Rather interrupts The Young and The Restless with a 30 second piece of news film and then proceeds to spend the next 45 minutes telling me what I saw. It’s an insult to my intelligence.

As I stated earlier, I believe Allen did not have a lot of material to work with in order to shape this biography in top form. I am not without sympathy or understanding; it is what Allen does to compensate for the empty spaces that have me riled. Throughout the book Allen gives in depth details about historical events that Goines either knew nothing about or was not a participant. The majority of the first half of the book is composed of a series of flat history lessons on events that took place during Goines lifetime: the background for the Korean War, Brown versus the Board of Education, to name only a few. I did not sign up for this kind of read. While it is good that Allen was seeking to provide a look at the type of world Goines was living in, Allen does not strike the proper balance. Instead of these history lessons enhancing the portrayal of Goines life, they tend to overshadow Goines, the man all together.

I kid you not. Thanks to Allen, I now have a greater knowledge of the history of Detroit, Michigan than I had before. Allen sent me through the origin of Detroit, the race riots in Detroit’s history, Mayor Coleman Young, even a brief history of Motown Records. I asked myself, "How did I end up reading about the Detroit riot of 1967?" Hold on though, the killer part to this whole episode s that before and after Allen wrote this section, he stated that Goines was locked up in the federal prison in Terre Haute, Indiana. What was the bloody point in discussing the 1967 riot in detail? You don’t know? *eyebrow raised* Huh, me either.

I mean no offense to the citizens of Detroit, but I could really care less about Detroit’s history. I’m reading this book to know the life of Donald Goines, not the city of Detroit. It also did not help Allen’s case that while he was going on and on about Detroit, he failed to mention Aretha Franklin. He might as well have brought up the Queen since he was bringing up everything else that had anything to do with Detroit.

I do not know what to make of the narrative; I do know that I did not like it. Allen attempted to use a narrative style of a story teller. Ordinarily, I would have no problem with that but here it fails horribly here. When I wasn’t being bombarded with an unwanted history lessons, Allen weaved together the stories and impressions he received during his research, while trying to maintain an objective third person narrative. Walking or riding, awake or asleep, this narrative combination falls flat on its face. The book would have flowed better if Allen had fashioned this book as a documentary.

The thing that burns me up the most about Low Road is that with the exception of a couple of nuggets of information, Low Road does not tell me anything new about Donald Goines, or elaborates on his life sufficiently enough to have warranted this book, which actually surprised me. What surprised me more is that the best part of the biography is the epilogue. Mainly due to the fact that Allen had ceased with the history lessons and is writing as the narrator. The epilogue is fresh. With the inclusion of a few more interviews, especially those of Goines children, Allen could have expanded this section into a book and titled it In Search of Donald Goines. Lord knows, after reading Low Roads, I’m still searching for Donald Goines.