Book Review: Beyond Glory: Joe Louis Vs. Max Schmeling, And A World On The Brink 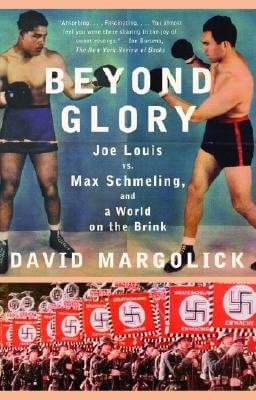 Read a Description of Beyond Glory: Joe Louis Vs. Max Schmeling, And A World On The Brink

Warning!  I've been cleaning up my library again-meaning I'm about to review an old book.  I have two walls full of bookshelves, whose shelves are full of books, some books I have read and others I have not.  I put one wall of books in order a few months ago.  I did not realize I had so many damn books.  Naturally, this does not deter me from wanting more books. *smile*  When I thought I had half of the books organized, I didn't.  I started arranging the books again, all the while cussing myself out for allowing the situation to get this out of hand.  During the second massive clean out, I came across a load of books that I put aside with every intention of reading when the dry spell of good black books started.  Right now, I am officially in the Sahara desert.

I went to the pile and pulled out Beyond Glory: Joe Louis vs. Max Schmeling and a World on the Brink by David Margolick.  Beyond Glory is the historical account of how the boxing matches between Joe Louis, the second African-American heavyweight champion in the world and Germany's Max Schmeling.  Author Margolick goes into an exhaustedly extensive account of the two boxers, the social and historical significance that the two boxing matches had on Nazi Germany and the United States.  I found the book educational and fascinating!  I loved it!  I could kick my own ass for not reading it years ago when it was initially published.

I am a boxing fan.  I am not a heavy duty boxing fanatic like my older brother Richard.  I grew up in the 1970's when boxing was frequently shown on TV on Friday nights and Saturday afternoons and Muhammad Ali was sitting on boxing's top throne.  I've been hooked for a while.  Any boxing fan, no matter the degree of fanaticism, knows about the Joe Louis and Max Schmeling fights.  Their two matches are the stuff of legends.  Beyond Glory begins with the earlier lives of Joe Louis and Max Schmeling, their family background, how they became boxers; and the rise of their boxing careers before their first bout, their lives between the bouts, and their lives after their last bout.  Margolick also brought into context how the Louis-Schmeling bouts affected the morale of the American and German citizens during pre-World War II days.

Clearly, Joe Louis was before my time.  I initially heard of Joe Louis from my father and my uncles.  I knew of his bouts with Schmeling and his problems with the IRS.  Margolick showed a side of Joe Louis I did not know: for instance the amount of racism in the sport press that Louis had to deal with; his relationship-or lack thereof-with his father who was in a mental asylum; how Louis had to deal with the looming presence and the past actions of the first African American heavyweight champion Jack Johnson in order to even get a shot at becoming the next black heavyweight champion of the world.  The tightrope Louis had to walk reminded me of President Obama and the line he had to walk in order to appear ’safe’ to white people in order to get their vote.  What's that old saying about history repeating itself? *eyebrow raised*

Margolick's account of Max Schmeling's life was totally new to me.  I began the book with preconceived notions of Schmeling being a Nazi and that entire Aryan superiority smack.  I have to give Margolick some props for being able to tell Schmeling's story: his relationship with the Nazis, Hitler, and his Jewish manager.  Schmeling had to walk his own tightrope in order to compete and gain credibility in the rest of the boxing world and not piss off the Nazis in Germany, who could have been a major thunderstorm over his parade.

Beyond Glory is an amazing account of how a sporting event captivated the world and held it in the palm of its hand, not once but twice.  The research Margolick did for the book is impressive.  I love that he was able to relay all of that information and not bore me to death with it.  Margolick also managed to achieve another feat; he was able to describe the anticipation, anxiousness, excitement and timing of boxing matches.  I know this may sound like a bit of a clich’, but reading the accounts-I felt as if I was there.  I could not ask for more.  Beyond Glory is magnificent and I highly recommend it.

Read Vintage’s description of Beyond Glory: Joe Louis Vs. Max Schmeling, And A World On The Brink.