Book Review: Gay Rebel of the Harlem Renaissance: Selections from the Work of Richard Bruce Nugent 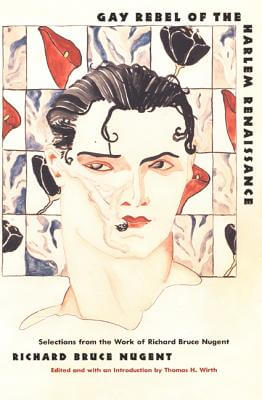 Read a Description of Gay Rebel of the Harlem Renaissance: Selections from the Work of Richard Bruce Nugent

The anthology begins with an extraordinary introduction, a brief biography of Nugent, written by Thomas Wirth, the editor. The biography unveils Nugent's works and opens a window to his character: a proud gay man who would not hide his homosexuality in the closet. While he may not have been the most renowned of the Renaissance artists, Nugent was, perhaps, the most romantic, because he did not compromise his art by censoring his homosexual identity. This personal stand resulted in the majority of his works going unpublished.

Gay Rebel of the Harlem Renaissance is an unexpected, shiny-wrapped Christmas gift -- one that keeps giving all year round. One of the first stories in the collection, perhaps his most popular and important piece, is Smoke, Lilies and Jade. I first read Smoke, Lilies and Jade in the Black Like Us anthology a few months ago and flipped. The main character reflects on his life, his love for a long time girlfriend and his attachment to his male lover who he refers to as Beauty. The story is amazing. Right then, I knew Nugent was a heavy hitter. Gay Rebel of the Harlem Renaissance bears this out.

I was most intrigued with Gentleman Jigger, an unpublished novel written by Nugent that is excerpted in this collection. As Wirth explains in his introduction, Gentleman Jigger covers the same ground as Wallace Thurman's Infants of the Spring, with similar characters and basic story lines. I enjoyed the excerpt and felt a little cheated that I didn't have the opportunity to read the entire book from beginning to end.

I could have stopped reading the anthology after reading Gentleman Jigger and Nugent's earlier works and been perfectly, snugly content. As the anthology progressed, Nugent's writings grew tighter and intriguing. The "After The Harlem Renaissance" section consists of short stories and excerpts from Nugent's later novels. These writings show maturity, confidence and daring that isn't present in his earlier work. In the latter stories, some inspired by Greek classics, Nugent becomes more adventurous, pushing and adapting boundaries, yet remaining faithful to the foundation of these stories. I enjoyed these stories the most.

After reading this anthology, I was left to ponder some "What If?" questions: What if Nugent's earlier books and short stories had been published despite their matter-of-fact treatment of homosexuality? Would James Baldwin be as revered today? Should Nugent be more respected today because he refused to concede and subject his stories to the editor's knife or should he be considered a fool because he didn't?