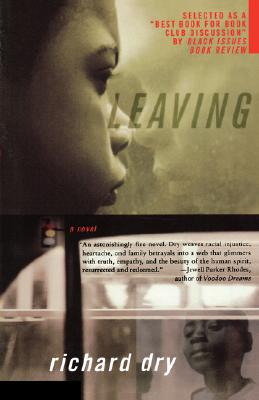 Read a Description of Leaving: A Novel

Leaving, the debut novel by Richard Dry, is an epic tale that spans three generations of a black family, from the 1950s to circa 2000. Leaving is an epic not only in size, with over 600 pages, but in depicting the vast scope of human nature and the emotional wounds inflicted from loving someone too much at times, and not enough at others. Leaving chronicles a family doing the best they can with what they have. The book is a mesmerizing tour de force, which comes to life — fluid, powerful, and deep.

Ruby Washington leaves her home in South Carolina with her half brother Love Easton (Love E) Childers to live with her father in Oakland, California. In their new home Ruby and Love E face new challenges and fight battles that were not left in South Carolina. As her family grows to include her daughter and grandsons, Ruby discovers that she must constantly fight to keep them together.

I was a little apprehensive to start Leaving. Leaving is a BAB (Big Azz Book), and my thick book phobia is alive and well. No matter how many BABs I love and am grateful that I read I’m still scared of BABs. Leaving was no exception even though I came to adore the novel. Leaving is a brilliant work of literature. Due to Dry’s knowledge of the inner workings of the human heart and mind, and his writing style, which is alternately poetic and hard edged. These qualities combined to inspire empathy for its solidly developed characters. The length of Leaving was more than justified. I finished Leaving intellectually stimulated, a little heartbroken, and ultimately, hopeful.

When I began Leaving, I suspected that I wasn’t going to like it, because the novel bounces back and forth among three time periods: 1959-1965, 1976-1986, and 1993-1994. I quietly went off, as I was not in the mood to read a novel that wanders all over the place. I’ve read enough books where authors have attempted this sort of time dance, trying to add profundity to a storyline that didn’t have enough depth to fill a shot glass. But, Leaving was the exception. Each section from the different time periods, complimented the others, like small streams converging to make one big river. The story had the effortless fluidity of mercury. I was awestruck.

At the end of every chapter, brief excerpts from biographies of African Americans, African-American histories, sociology books, and slave narratives from Santa Rita prison are presented. Adding these excerpts was a stroke of genius, infusing even greater texture, complexity, and dimensions into the story. The characters, the storyline, and the structure of the novel were marvelous in and of themselves, but with the addition of the excerpts Leaving was sent to the moon on a rocket.

Leaving isn’t merely a family saga — or in this case, a story of a family that, that despite racism, carves out a life in California. Written in a poetic prose that exposes the strength, frailty, and tenacity of human nature, and inserted into a challenging structure that stimulates the mind and soul, Leaving is a modern day classic.