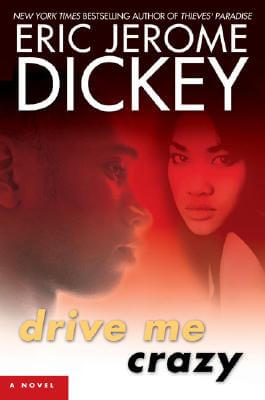 Read a Description of Drive Me Crazy

When I began writing this review one of my favorite Nancy Wilson recordings, How Glad I Am, was playing in the background. The record perfectly captures my feelings concerning Eric Jerome Dickey's new novel, Drive Me Crazy. In this novel Dickey returns to the same fertile ground that produced Thieves Paradise. Although Drive Me Crazy does not have the same hard edge grittiness that Thieves Paradise possesses, it has enough to give the story a spicy flavor that I found enticing. Nancy is not the only one in the room singing about being glad. After reading Drive Me Crazy, I'm feeling kinda glad myself.

Driver, a 40 year old convicted felon on parole, finds himself in one hell of a predicament. Six months ago, his prospects were dim, to say the least. No one had been willing to have an ex con on their payroll. Driver had been scraping by until he met Lisa. Lisa, an ex-policewoman with serious connections, has an affair with Driver and asks him to kill her husband. Lisa gives Driver a down payment for the contract hit. Later he reneges on the deal. Instead of killing him, Driver befriends Lisa's husband, Wolf, and starts working for Wolf at his limousine company as a driver. Now six months later, Lisa gives Driver an ultimatum, Driver has three days to pay back the money she gave him for the now defunct Wolf assassination--that is if Driver likes inhaling and exhaling air without dirt getting in the way.

With Drive Me Crazy, Dickey is back on track. When Dickey's novel Thieves Paradise hit the street, I was one happy soul. The novel was a true departure from Dickey's other novels and he did a brilliant job with it. Just when I thought Dickey had turned a corner and I was going to get more novels in the Thieves Paradise vein, he hit me with the novel The Other Woman. That book worked my nerves. Let me just say that I was less than pleased with it and leave it at that.

I was somewhat leery when it came to reading Drive Me Crazy. I was not in the mood for another book like The Other Woman. I knew I was going to read Drive Me Crazy because, well, even with one misstep, Dickey is still my boy. I got the book, read the book flap and could hardly contain my excitement. Ex con, contract hit, threat of physical violence, death, hell, just my cup of tea. Drive Me Crazy lived up to the hype.

Dickey does a good job assembling his cast of characters in Drive Me Crazy. Dickey's previous work had always contained excellent character development and dialogue. Driver is one of his best creations. Driver, the protagonist, narrates the novel with a captivating voice. This is Driver's story and he never allowed me to forget it. Driver is a well rounded character with positive attributes as well as having a few issues. He is surrounded by other interesting characters: Lisa, a nut case that I could not help but to pity; Wolf, a white man I could have slapped the hell out of; and Rufus, Driver's albino brother whose life could be a separate novel in itself.

Drive Me Crazy's largest and most attractive asset is Dickey's growing skill as a writer. Dickey brings another dimension to the story by incorporating a series of flashbacks of Driver's early family life. The flashbacks serve two purposes. One, Driver's childhood provides information I needed to understand Driver. The fact that Driver's family life was painful and messy made the flashbacks deliciously irresistible. Two, the flashbacks allowed Dickey to control the pace of the story. The pacing of Drive Me Crazy accelerates or crawls according to the bends and hills of the story, much like good sex. There are not too many of today's authors who can properly incorporate flashbacks in a story without destroying it. Dickey worked the flashbacks like a champ.

Drive Me Crazy is an invigorating, hard to put down read, simply one of the best books of the year. Dickey is back in my good graces, hopefully for good.