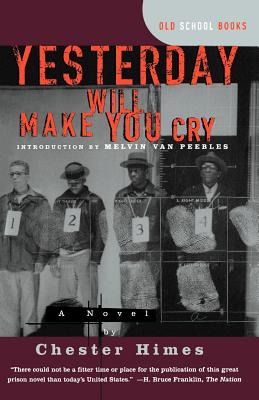 Read a Description of Yesterday Will Make You Cry

Yesterday Will Make You Cry is the first novel by Chester Himes. This is the complete, unabridged version of Cast The First Stone. This novel is about a white convict by the name of Jimmy Monroe and his time in prison. From reading the introduction of the book, I gather that this book was cut and changed because of the controversial nature of the book. Himes’ portrait of prison is disturbing, not because of the honest, unflinching violent nature of prison, but of the tenderness and love that it can represent.

Jimmy Monroe goes through some changes in prison. Maturity. Self exploration. When your eyes have nothing new to see, they will, involuntarily turn to the soul, stimulated by unseen territory, drawn to it like flies to a rotting corpse. Being still, no place to go, the self can no longer be shy. Jimmy Monroe’s eye turned inward and he saw himself. In all of his glory. He becomes human in prison. He learns to live and to love. He finally becomes a man. Often time, when the body is still, the soul can soar. So in a prison where he has to be told when to eat, what to eat, what to dress, Jimmy Monroe is forced to be still. His soul take flight.

Jimmy Monroe finally learns what it is to love. In this, I believe, is the reason for the controversy of this book. Himes’ beautifully depicts Monroe loving a man. Not in the physical sense, but emotionally. He showed the intermingle of two souls, regardless of gender, or physical characteristics, but of heart and mind. Rape, murder, the resulting conclusions to what a human mind can compose and make real, we can accept. But to show that a love can emerge from the garbage, AND KNOW that it has probably happened in the past and can happen in the future … is that allowed?

This novel is the evolution of a man. A man becoming human, in a place that is the home of inhuman actions. Told in a beautiful voice that is powerful and gripping in it’s subtlety, Himes is nothing less than genius. At times the story is so rich, I had to step away from it. Haunting. Surely the song “Spanish Harlem” must have been written for his talents. Never would I have put the man who brought Cotton Comes To Harlem capable of this.

I also have the unfounded, uneducated opinion that he could have set the literary world on fire … if he was white. I’m glad I spent a week with this one. A moving tale of the human spirit. It’s not to be missed.