Book Review: The Girl Who Fell From The Sky 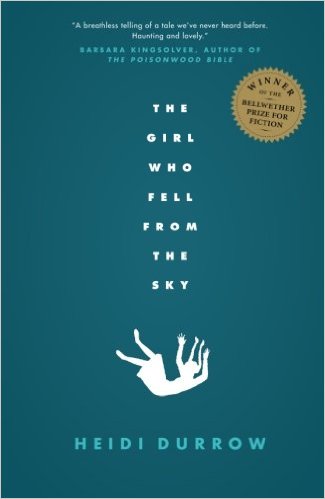 Read a Description of The Girl Who Fell From The Sky

The Girl Who Fell from the Sky by Heidi W. Durrow is the most remarkable debut novel that I have read in years! The small novel about a young girl, a lone survivor of a family tragedy, is stunning. The novel hit me with the force of a hurricane strength wind knocking the air out my lungs. When I finished the novel, I just sat; quiet and mesmerized with my mouth wide open. Durrow, in her first outing, come the closest of reaching the great mythical plateau – The Great American Novel. The Girl Who Fell from the Sky is an ass wiper!

During her first year in America, in 1982, when she was 11 years old, Rachel Morse lived through a tragedy that many of us can only conceive of as a living nightmare. Rachel, her white Danish mother Nella, Brother Robbie and baby sister Ariel fell from the top of their Chicago apartment building. Rachel is the only survivor. The authorities, Rachel's extended family and friends, do not know if the family jumped or was pushed. When it is safe enough for her to travel, Rachel is sent to live with her grandmother and Aunt Loretta, who she has never laid eyes on before. Rachel does not see her African American father Roger. The novel is Rachel's and Nella's story: how Nella left Roger and brought their children to live in Chicago; Rachel's feelings of abandonment and being a stranger in her own family; and Rachel eventually coming to terms with her inner self and identity. The novel's narration duty is shared among three characters: Rachel, Lorrane and Brick. Lorrane was Nella's supervisor when she came to Chicago and Brick was a little black boy who lived in the same apartment building as Rachel and her family. While Brick and Rachel voices shape Rachel's story, Lorrane brings Nella's story to life with the assistance of Nella's journal. Through space, alternating time and settings, the novel is completely realized.

Durrow does a magnificent job in capturing Rachel's life and bringing it to the page. Rachel is not only a charming character; she becomes a real young person. Rachel got my sympathy when she began struggling with her racial identity. While Rachel is the main character, she also serves another purpose, as a springboard for Durrow to dive into a discussion on race in America. Durrow examination of race through Rachel and Nella's eyes is poignant and insightful. Durrow was able to give a reality gut check on being black or biracial in America. I had not been moved, emotionally nor intellectually, on a perspective about race since Toni Morrison's Beloved.

Speaking of Morrison, Durrow was able to produce the same power that I have seen in works of Morrison and Faulkner. Durrow accomplish this feat with her own unique voice. Where Morrison love to use the complex, convoluted, thought exhausting sentences to float her stories boat, Durrow goes in the opposite direction by using short, uncomplicated sentences to construct the mood and direct the flow of the story. The simple sentences are used with laser accuracy to paint a complete picture; in the same manner Georges-Pierre Seurat used spots of color in his paintings. *smiling* You wasn't expecting me to drop a name like Seurat on you, were you? *LOL* Up close, Durrow's sentences are undemanding, but when the story is look upon from a distance, it is colorful, sharp and vivid.

The Girl Who Fell from the Sky is an unqualified winner. The story evolves and becomes a living and breathing being, rising and ebbing like waves along the shore. The novel reads sounds and has the feel of the blues. Durrow was able to accomplish this feat by using small concise sentences, which may not look like much when examined on their own, but when thrown together, paints a vibrant picture alive in color. Durrow emerges as THE new powerful voice on the literary scene today.

Read One World’s description of The Girl Who Fell From The Sky.