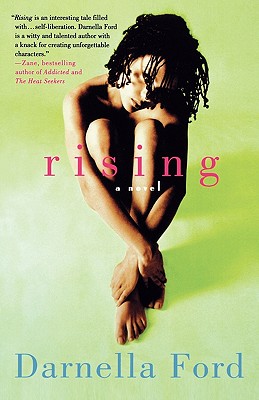 Read a Description of Rising

Rising, Darnella Ford’s fictional debut is explosive. It is the story of a young girl who lives through a number of tragic occurrences. Rising hits the ground running, but unfortunately does not maintain its initial intoxicating momentum. But nonetheless, Rising remains a disturbingly memorable novel.

Symone, a blonde haired, blue-eyed black girl is eight years old when her drug addict/prostitute mother dies from an overdose. Symone is sent to an orphanage in her hometown of Dorchester, Massachusetts, where a rich white couple from Eden, Michigan, the Ridge Hustons, adopts her. Symone soon discovers that she has been uprooted from her world of poverty for an opulent, luxurious home in Hell. Years later Symone returns to Eden, and this homeward journey will leave her scrambling to reassemble her shattered life.

The first half of the book sparkled. Ford created an exquisite character in Symone — feisty, smart, tough and broken. Instantly she had my sympathy. Ford skillfully displayed Symone’s transition from an intelligent, strong, young girl to a traumatized young woman barely keeping it together.

Symone narrates her story and I found her voice to be enthralling, as she told tales of her childhood, life with her mother, early childhood friends and other experiences. Ford did a remarkable job bringing Symone’s inner-city existence to life. I could hear the police sirens, inhale the fumes from the urine-stained mattress, and feel the warmth of familiarity and security in Symone’s reminiscences.

Ford flipped the script on me when she began the second portion of Rising with Symone as an adult recalling her teenage years, all in the span of a single day. I didn’t care for this approach. I felt I was riding downstream only to be violently jerked and moved upstream instead. I wondered what happened during Symone’s years with her adopted parents. I had to wait for Symone to dole out pieces of these years bit by bit, via flashbacks, totally disrupting the rhythm that was superbly established in the first section of the book. If Symone had been able to continue her narration in chronological order, Rising would have been mesmerizing. While the second half was just as poignant as the first, the change in the pacing diminished its impact.

The ending of Rising was unsettling. While I had no problem believing it, I’m not a fan of it. I can’t comprehend why Symone didn’t at least guess the outcome. The second half of the novel would have been more dramatic and intriguing if Symone had learned this particular truth during her teenage years. As it stands now, the ending is problematic for it caused the author to tie up a number of loose ends rather shabbily.

Although I may appear somewhat stingy in my praise of Rising, I was swept up, and then swept away by Symone’s life. I read Rising, in a single sitting on one cold Sunday in December. While portions of the book were awesome, by the end, Rising had lost some of its striking force. Yet, Rising retained enough power to be unforgettable, making Darnella Ford a welcome new talent.