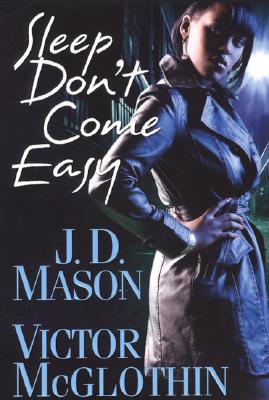 by J.D. Mason and Victor McGlothin

I came across Sleep don't Come Easy by J.D. Mason and Victor McGlothin some time ago.  I threw it in my ’to read’ pile when I spotted J.D. Mason’s name on the front cover.  I have been a huge fan of Mason since I read one of her early novels, And on the Eighth Day She Rested.  I have been hooked on Mason from that day on.  Now that I am back into the swing of reading and reviewing, I reached into my mountainous ’to read’ stack and pulled out the short story anthology Sleep don't Come Easy.  Although I have been in love with Mason for years, I had not read any of Victor McGlothin works.  None of his novel summaries captured my attention enough for me to want to read any of his books.  I was willing to give McGlothin a shot, and he did not disappoint.  Both authors delivered fantastic detective/mystery stories.  I dived into the book with a thirst that I knew was about to be quenched, if not by McGlothin then definitely by Mason, because Mason can do no wrong when it comes to a story.  From the first page to the last, Sleep don't Come Easy was a gooey, sticky-sweet, delicious treat.  I LOVED IT!

In J.D. Mason’s The Lazarus Man:  Fatema Morris is a having a rough go of it lately.  She recently divorced her husband Andrew (who she still loves).  She is drinking herself to sleep, and barely holding on to her job as an investigative reporter because she broke the cardinal rule of journalism: fabricating a story.  To put a cherry on the cake of it all, she is told her best friend, Toni Robbins, has been murdered.  Suspicions soon falls on the two men in Toni’s romantic life: Lucas Shaw, the married mayor of Denver; and Nelson Monroe, the founder and proprietor of The Broadway, a homeless shelter.  Unbeknownst to the authorities there is an eyewitness to the murder; a homeless, mentally impaired, old man named Lazarus.  Can Fatema and Lazarus survive long enough to unmask Toni’s murderer?

In Victor McGlothin’s Tomorrow’s Edge, Vera Miles is the only detective at Miles Above Investigations.  One day a white cowboy named Rags comes into her office wanting to hire her.  Rags can't remember his real name, or any of his past.  He has a recurring nightmare of seeing a white man with a large face getting shot.  Rags is worried that he may be the shooter.  The mystery is killing him. He wants Vera to uncover his past and tell him if he is a cold blooded killer.  As Vera chases one failed lead after the other, she unknowingly trips over the key to solving the case, but she may not live long enough to realize it.

It had been a few years since I have read anything new from Mason and I was in desperate need of a fix. The Lazarus Man fit the bill.  The story was infectious and rich.  The characters, the subplots, the pacing of the story were dead on.  The story has a few intriguing twists in it, adding a complexity to the ending, which made me stop and ponder the revelation for a second or two.

With Sleep don't Come Easy comes the first time I read Victor McGlothin, and if it had not been for my longing a ’new’ J.D. Mason story, I doubt if I would have given him the time of day.  Tomorrow’s Edge is a funny, concrete story.  The mystery was soundly constructed.  I correctly determined who the murderer was early on, but I’ve been reading these stories for decades.  It takes a bona fide, incredible, outer worldly mystery to stump me.  My pleasure in reading these stories is watching the detective going through the process of solving the mystery. I had a BALL watching Vera do her thang.

By reading Tomorrow’s Edge, my old literary staple was reawakened: the private detective mysteries.  Vera has all of the components that makes a good detective: she has a steady squeeze in Bertram ’Bullet’ Manning (a former professional boxer and owner of The 3rd Round Bar and Grill sports bar); a street smart best friend in Glow Raines (a con woman); Vera has bills and not enough paying business to get the ends to meet regularly, indicating the endless morality duel of making money and doing the right thing; and finally, most importantly, Vera is a fascinating character in her own right.  With Tomorrow’s Edge, McGlothin has crafted an excellent beginning to a new detective series, if he chooses to make it so.

Sleep don't Come Easy is a superb, worthwhile anthology that almost got past me.  I'm happy that it did not.  Mason continues to enthrall me.  McGlothin turned out to be a pleasant surprise.  Reading this wonderful anthology did get me to look around and ask where all of my beautiful detectives and their unsolved murders and mayhem went.  At least Sleep don't Come Easy provided me a respite and a little bit of hope.