Book Review: And on the Eighth Day She Rested: A Novel 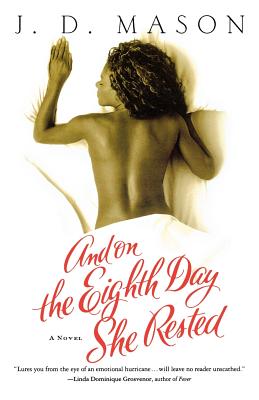 Read a Description of And on the Eighth Day She Rested: A Novel

Lately, I have been in one of my lazy reading moods. I wanted a book that would go easy on my ol’ noggin. As you all know, my normal reading fare is heavy in subject matter and quality. I was in the mood for a book where I can exhale, a bit, a "Calgon-take-me-away" book. I looked around my office and a book caught my eye. I saw the cover, and then I read the title, And On The Eighth Day She Rested, the debut novel by J. D. Mason. Instantly, I was fascinated because I’m a cover and title person. If the title is catchy and/or the cover is gorgeous, I’ll pick the book up and glance inside. And On The Eighth Day She Rested had those two things going for it. After completion the novel won me over completely by being a damn good read. Although it is a story of a woman who survived an abusive, 14-year marriage, And On The Eighth Day She Rested is a pleasant and enjoyable novel.

The punch line to an old joke says, "It’s not a marriage, it’s a bad situation". Ruth Johnson is in a very bad situation. Her marriage to Eric is past intolerable. Not only does Ruth have to deal with Eric’s womanizing, and his long absences from home, but when Eric is home, he’s going up side Ruth’s head. Ruth has had enough. After an explosive confrontation, Eric and Ruth’s marriage is over. Now that Ruth has ended her marriage, she’ll have to start over and create a new life. As she begins her journey, Ruth finds new friends along the way: outspoken Bernie; motherly, supportive Clara; and the epitome of a Southern belle, May. From each of these women, Ruth acquires new perspectives and gain strengths. She will need the qualities in order to deal with trials, new loves, and her haunting past as she travels down the yellow brick road of her life.

And On The Eighth Day She Rested caught me by surprise. I’m not ashamed to admit it. After the title and cover won me over, I was expecting a "U-Go-Girl!" book. Granted, there were a few "U-Go-Girl!"-ish moments, but the novel is not a "U-Go-Girl!" book. It is Ruth’s story of surviving and living beyond her abusive marriage. Domestic violence wasn’t a ploy, used to draw a reader in only to provide a poor imitation of a devastating social problem. Mason takes Ruth and I through the storm of rebuilding a life from the shattered pieces of a violent relationship. Ruth faced a few hurdles I hadn’t anticipated.

The characters’ interactions with each other caught me off guard. When I initially read the book jacket, I knew I was in for a four sista-girlfriend story. The three/four sista-girlfriends story is played out, as far as I’m concerned. But Mason’s approach was different, for while the three other women were Ruth’s friends, they were not friends of each other. Towards the end of the novel, Clara, Bernie, and May had never met or talked. Ruth was their only common denominator. I liked this change of pace. It may not be new, but in this day and age of the "U-Go-Girl!" four sista-girlfriends novels, it is fresh.

The only pothole in Ruth’s yellow brick road was the happy ending. It was quite predictable. Normally, when I enjoy a book as much as I did And On The Eighth Day She Rested, I will forgive a happy ending, but I was disappointed with Ruth’s position at the end of the book. Without giving away the ending, I wanted Ruth, finally, to stand squarely on her own two feet. Not just Ruth, but Bernie, May and even Clara were left with bright and happy futures, leaving the plot and subplots too neat and tightly wrapped. Nonetheless I took delight in the book, in spite of the ending.

One of the high points of the novel was Mason’s narrative style. I liked it. The story was fluid and well paced. Her ability to pique my interest in the story from the first page was good. I also appreciate that Mason didn’t shy away from Ruth and Eric’s violent fights and managed to dig deeper into what makes up and breathes life into a violent domestic relationship. I give Mason much props for a job well done.

And On The Eighth Day She Rested is irresistible. I lost sleep reading it. Although the older I get, the harder it is to snap back from a reading all-nighter and carry on with the new day’s activities. But, what the hell, I have one more day to work this week, which is Thursday, then I go on my usual 3 day weekend. (Yep, I get ’em every week. Jealous? *eyebrow raised* Yeah, you are too! *giggling*). Happy ending not withstanding, I thoroughly enjoyed And On The Eighth Day She Rested, and I don’t mind losing sleep over it.

Read St. Martin’s Griffin’s description of And on the Eighth Day She Rested: A Novel.