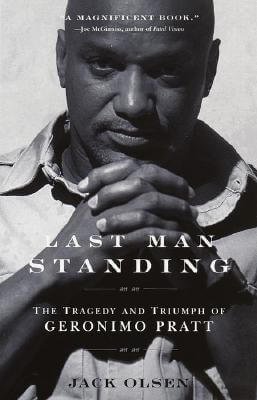 Read a Description of Last Man Standing: The Tragedy and Triumph of Geronimo Pratt

The year, 2002, I decided to take Black History Month literally by reading books that expanded my scope of being black in America. I decided to read Last Man Standing: The Tragedy and Triumph of Geronimo Pratt by Jack Olsen. Last Man Standing is an excellent book that chronicles the life of former Black Panther Elmer "Geronimo" Pratt and the lifetime he spent behind bars, serving time for a murder he did not commit. Not only is the book a testament to one man's strength and courage, it's also a story of the United States government being allowed to run amuck, unchecked and unhampered doing the opposite of its laws and the essence of what American democracy stands for and what these individuals swore to God to uphold. Last Man Standing is also a story of a group of individuals that held the ideal and promise of what America should be-but isn't, could be-but ain't.

Elmer Gerard Pratt was born and raised in Louisiana, the baby of a large family. Upon graduation from high school, Pratt joined the Army and fought in Viet Nam. After spending some time in Chicago and going home for a spell, Pratt decides to drive with his sister to Los Angeles. The simple, short planned trip would change his life forever. While in L.A., Pratt became involved with The Black Panther Party. Little did Pratt know that this association would bring the full power and persuasion of the United States federal government on his head. Pratt, defended by Johnnie Cochran, was tried and convicted for the murder of a young woman that he did not commit. The California state judicial system, the Los Angeles Police Department, and the FBI KNEW Pratt was innocent! All three entities would work together to keep Pratt behind bars, in actuality, attempt, on more than one occasion, to kill him, at the minimum drive him completely insane. No one would believe Pratt, at the time of his arrest, that he was the target of a government conspiracy. Pratt was then immediately incarcerated in solitary isolation, the "hole", for 8 years, having done nothing to warrant this extremely severe punishment, for that length of time. Stuart Hanlon, then a law student, takes on Pratt's case. Hanlon would continue to defend and fight for Pratt's treatment in prison and his ultimate release, 22 years later. Pratt was cleared and freed in 1997, after being incarcerated since 1970, 27 years. Last Man Standing is a book about justice denied, the strength of the human spirit and how American democracy is only as good as the people in it.

Last Man Standing is an excellent biography. Olsen did a commendable job simplifying, expounding the bare bones of Geronimo Pratt's legal battles, exposing and tracing the FBI's involvement and their COINTELPRO actions. The book established a fine balance between biography and history. It possessed the flow, suspense and narrative of a fine novel, which in my opinion produces the best history books. While it would have been easy to portray Pratt a martyr, Olsen kept the blunt and rough edges on, making Pratt and Hanlon human and not fictional characters. I will admit; I got emotionally attached.

I received Last Man Standing some time ago and placed it on my To Be Read pile of books. One day I decided to straighten out my office, it was wreck. I now have a lot of small heaps of books lying around, instead of large, about-to-topple-over columns. Last Man Standing wound up on top of a small heap by my office door. Everyday, as I entered and left my office, I would see Pratt's face, it's the front cover of the book. If Pratt looked like Bebe Moore Campbell, Last Man Standing could have stayed at its highly visible perch from now to when times get better. Since that was not the case, I finally read Last Man Standing, not for any noble cause or being interested in his life or the miscarriage of justice that Pratt and his family endured, nor to learn of J. Edgar Hoover's racist attitudes and his actions, his desire to exterminated any black political group that he saw leading the much feared, fairy tale insurrections; I read Last Man Standing to get Pratt's face out of my office! *big smile*

Currently, we are living in a time, due to the tragic events of September 11, where the discussion of losing, maybe the better word would be "voluntary suspension" our civil liberties for added national security. As if we can show how patriotic we are, how American we are, by doing away with our basic American civil rights. Civil rights we were denied for so many years. They (that's right, the ominous, and still very much alive and well "THEY" that encompasses: the white folks that were willing to let continual and violent injustice continue to happen without raising one syllable of protest or basic human decency; the white folks that is heard saying and thinking whenever a racial situation is brought to light, "Now, what do they want?’ the southern white folks that wanted to keep us under their thumbs in order to feel good about themselves and have never gotten over the fact the South lost the Civil War and Scarlet O'Hara had to pick cotton; the Booker T. Washington-thinking black folks who claims that we were moving too fast, want to hold out for the time that white folks will one day see the err of their way (as if the past 300 years didn't contain enough days) and ’What would the white folks think about us as a people-because not all of us act the way those southern, ill-behaved, ghetto fabulous dressing, no manners having, love saying the word "ain't" and dropping g's and t's all over the damn place Negroes’) didn't want us to know about in the first place, and would damn us to Hell because we had the nerves to DEMAND our rights, in the second place. How does fighting an enemy, combating terrorism, enhance, or expedite what we now face? Will the battle become more severe, more violent, more complete, by me giving up my civil rights of due process, or of walking down the street without being arrested by the police for reasons that will be given to me at a later date-if the police are incline to enlighten me at all? If you know, please explain because I believe that somebody is trying to play me for a damn fool.

Last Man Standing has left me with the notion that we must be more aware, diligent, and vocal when we are confronted with violations of our civil rights. Our civil rights can't be taken for granted. For 27 years, Pratt was denied his civil liberties all in the name of "safety". It cost him and his family a lifetime, time that he can never get back. A number of Pratt's contemporaries and associates lost their lives. Last Man Standing is a brilliant biography of an exceptional life and that we all must be our brother's keeper for none of us can fly on one wing.