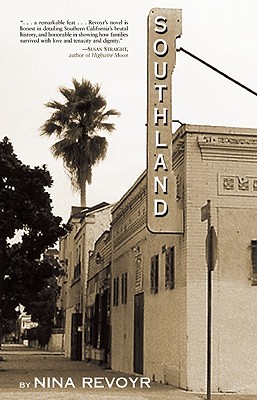 Read a Description of Southland

In the beginning of my throes into books that I missed the first time around and cleaning out my library, one of my discoveries was the second novel by Nina Revoyr titled Southland. I first read Revoyr’s debut novel, The Necessary Hunger, many years ago when I first came to AALBC.com. At the time I would have placed Revoyr in the same category as Susan Straight (I Been in Sorrow’s Kitchen and Licked Out All the Pots, and The Getting Place) as authors who can tell truthful stories about African Americans, the realistic interaction of African Americans with other cultures and the authors themselves are not African American. In The Necessary Hunger, a young Japanese female basketball player struggles with her sexuality when she falls for one of her African American teammates. The situation gets worse when her father marries the mother of the teammate. I loved The Necessary Hunger! It’s an incredible novel. In Southland, Revoyr continues the Japanese American-African American connection with an incredible family drama. With The Necessary Hunger, Revoyr simply fell into my ’author to watch out for’ group. After reading Southland, I can officially state that I am beyond a fan, I am a HUGE fan. Put Southland on the list, it’s an ass wiper.

After the death of her grandfather, Frank Sakai; Jackie Ishida, a 25 years old lesbian law student, is given a mission. Jackie’s aunt Lois Sakai found $38,000 in her father’s bedroom. The money is left over from the sale of Frank’s store back in the 1965, immediately after the Watts Riot. According to Frank’s old will, the store was to be left to a young black man, Curtis Martindale. Lois wants Jackie to find Curtis in order to give him the money because Lois believes the money rightfully belongs to Curtis; this is what her father would have wanted. In her search for Curtis, Jackie encounters James Lanier, Curtis’s cousin. James tells Jackie that Curtis is dead; he and three other young black men were murdered in her grandfather’s store during the riot. The murders were never solved. Jackie, now with the assistance of James, is determined to find the murderer and in the process unearths a family secret.

Southland is an incredible epic. The novel has everything I could possibly want in a novel: romance, historical events, family drama, and a murder mystery. The novel is absorbing, smooth and addictive. It drips in richness. The characters simply walk off the pages already in human form. If I had the power and money, Southland would be a miniseries that I would broadcast during the May sweeps. Even with all of the excellent qualities the novel possesses, I do have a bone to pick. First, I'll sing the praises of the novel before I gnaw on that bone.

Southland is more than one type of book, as I mentioned earlier. One of its most enduring qualities is the historical events Revoyr explores: the internment of Japanese-Americans during World War II and the Watts riot. The Watts riot, I knew about, having seen news films and having read accounts of the riot. Before reading Southland, I knew little of the internment of Japanese-Americans during the Second World War. It was not mentioned in any of my history classes. The German concentration camps were taught. With Hogan Heroes, albeit a situation comedy, at least I knew about POW camps. The fact that America would treat its own citizens in this fashion was not mentioned in any history lecture or written in one chapter of any of the history books I was taught by. It boggled my mind and pissed me off. Revoyr made the Japanese-American internment real to me. The suffering, the injustice Japanese-Americans endured is appalling. Besides making me extremely angry; I could not help thinking that I should not be surprised or shocked by these actions for wasn't the same people responsible for this, responsible for slavery, Jim Crow laws and lynching.

I loved that Revoyr showed the interactions between the Japanese Americans and African Americans. In certain sections of California these two groups actually lived together, got along with each other. There were friendships, lovers, and sharing of cultures. While it shouldn’t be anything extraordinary, it is worth noting because that same feeling of respect does not seem to exist anymore. Revoyr showed it to me and I hate that I am not able to witness this community for myself.

I am about to say something that will shock some of you, Revoyr extensively uses flashbacks in the novel, and I loved it. You all know, normally, I hate flashbacks. Flashbacks disrupt the flow of a story. While one or two or even three flashbacks may be necessary, most authors today uses them entirely too much. For instance if a third to half of the novel consists of flashbacks, the story should be told in chronological order. The only people who seem to get a kick out of flashbacks are authors and their editors, because flashbacks don't do me any good. I would like to ask all of the authors and editors who are in love with flashbacks, if you were telling this story to a group of people, in person, would the story unfold in chronological order or would you use a bunch of flashbacks? With Southland, I set aside my usual disdain of flashbacks. Revoyr used them wisely. The flashbacks enhanced the main story. The more I read, the deeper I got into the story, the more affluent the story became.

At the risk of confusing you, because I LOVE Southland: I hated the ending! The book ended with a flashback. When I reached the end of the book, the story had been told completely. Everything there was to know about the characters had been revealed. The purpose of ending the book with a flashback from 1965 was stupid. I don't get it. Revoyr went to the flashback well one time too many. What was the point of ending the novel with a flashback? I was mad and disappointed. It was like Revoyr had spit and slobbered on her hand and wiped my face with it.

Putting the ending aside, Southland is a marvelous novel. I loved it! I don't know what dope I was smoking that I did not read it when it was initially published, but I’m glad I finally corrected that oversight.