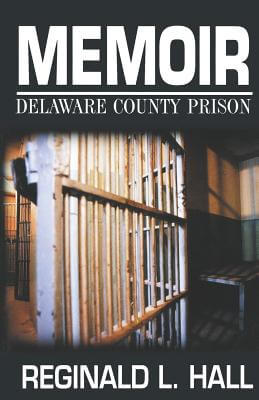 Memoir: Delaware County Prison by Reginald L. Hall is a non-fiction account of the eight months Hall, an openly gay man, spent in prison for credit card fraud. Sound interesting enough, right? *eyebrow raised* It’s not. I will try to keep this review short since there is a good possibility that this review could be longer than the book. Memoir is problematic to say the least. It is loose, not long enough and completely dull. If Mother Nature had not already taken the hair on the top of my head; after reading Memoir, I would have pulled every strand out. Instead, when I reached up there, all I felt was air, skin and memories. Good thing the Memoir only took me a minute or two to read.

When Memoir came across my desk, I thought, ’a prison book. I Ain't read one of those in a while.’ I read Chester Himes novels and autobiographies. I read some of my uncle’s stuff and heard stories of when he was in prison. Hell, I even use to watch the HBO series OZ. I was all set for a good ol’ prison drama. Instead of being served the steak of my wishes—the one that had my mouth watering—I was presented with a White Castle hamburger, with one pickle and no cheese on it.

Memoir was nothing that I expected. When I selected the novel to review, I was expecting a gritty, realistic, violent account of suffering, survival and redemption. I thought I was going to read about an openly gay man’s experience in prison, believing it to be different than a straight man being incarcerated. After reading the first few pages of Memoir, my bubble was unceremoniously, definitively busted. By the middle of the book, I was shouting, ’Editor, editor, my discussion board for an editor!’ I was not pleased.

At the beginning of the book, I got the distinct impression that Hall was not telling me everything, which is odd for an autobiography. Maybe it is just me, but the premise of an autobiography is that the author is laying his life wide open for the reading audience. It is hard for me to read a biography of a person I know nothing about. I do not know Hall from Adam. Hall had the obstacle of making me care about him and what had happen to him in order to make me want to read about his ordeal. He did not overcome this hurdle. Hall was very elusive about his life before he went to prison. He did not share any information about his parents, siblings, friends, or anything about him that could capture my attention or garner my sympathy.

If Hall wanted to keep certain aspects of his life—before, during and after prison—private; he should have written Memoir as a fictional novel. By being selective in what he chose to put on paper, Hall not only failed to reveal himself, he left several loose strings dangling by the end of the book. For instance, I found it strange that Hall would know which cell block he wanted to be assigned to but he did not know that he would have to use the bathroom out in the open. *eyebrow raised*

Memoir reads like a ’What I Did Last Summer’ grade school essay that I use to write each fall at the beginning of the school year. The biggest fault that I have with Memoir is that Hall is not a storyteller. His voice, or writing style, is not compelling nor was it able to enchant me. Fiction, non-fiction, it makes no difference; the author has to be able to carry a story. With Memoir, Hall fails.