Book Review: Never Been A Time: The 1917 Race Riot That Sparked The Civil Rights Movement 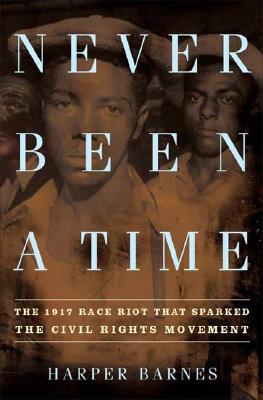 Read a Description of Never Been A Time: The 1917 Race Riot That Sparked The Civil Rights Movement

I am continuing my own personal goal of reading more history and biography books.  If my memory serves me correctly, I think it had something to do with a discussion Troy and I had on the board many years ago.  Troy read mostly non-fiction titles and I read almost exclusively fiction.  In an effort of self-improvement we vowed to read more of the books that we, at the time weren’t reading.  Truth be told, Troy kept up his end a lot better than I did mine.  Fiction remains my great love, but I realized years ago that although I can read a historical novel, it’s not the same thing as reading history.  Oddly enough, I have become attached to books on lynching and race riots.  Do not get it twisted, I get pissed off every time I read a book on the cruelty black folks have suffered over the past century.  I believe that it’s more important that I know what went on instead of mentally and academically glossing over it.  In some small way, I see it as bearing witness.  Sure, I cannot do anything about it; yeah, I want to reach my right hand back into history in order to knock the Hell out of a few people; but, what I can do is read about it, pray over it and acknowledge the pain the ancestors went through and be proud that in spite of all the shit we as a people went through there are writers here to tell the tale and I am here to hear it.

Author Harper Barnes wrote such a tale titled Never Been a Time: The 1917 Race Riot that Sparked the Civil Rights Movement.  Never Been a Time is an awesome book!  He lays out the birth and early history of East St. Louis.  Barnes looks at every conceivable factor that went into laying the groundwork, on federal and local levels, for the riot to take place.  The riot is covered exhaustively.  The last portion of the book dealt with the aftermath of the riot.

It took me more than a minute to get into the book.  I turned into the kid that sees a line drive baseball headed my way and I know I’m going to miss it, the ball is going to hit me and it’s going to hurt like hell.  Barnes eased me into it by discussing slavery, the lynching and killings that were happening to blacks not only in the South but in the North as well, the roles companies and their relationships with the union played, and the Great Migration of African Americans from the South to the North.  I LOVED IT!  Not only in the amount of details and attention Barnes relayed, I was more impressed with how Barnes relayed it.  Barnes has the second essential element of all good historians; he knows how to tell a story.  Barnes has a relaxing, captivating voice.  The story flowed like fine wine, literally.  I ain’t going to lie, I was caught up.  By the time Barnes took me to the riot itself, I could not turn away if I wanted to.  Barnes did not shy away from any of the atrocities of the riot.  Oh, I got royally pissed off and stayed that way, but I kept reading.

What separates Never Been a Time from other history books is that Barnes took the time to discuss what happened to many of the principal players after the riots.  I appreciated it.  The book truly had a beginning, middle, and an end.  However, I slightly disagreed with Barnes assessment as to the contributors of the riot.  I felt he left out a contributor to the riot, Robert Abbott, the founder and editor of the black newspaper The Chicago Defender.  I state this because even though Abbott knew that there were no places for all of the Southern blacks who emigrated to live or work in the North.  Yet, Abbott kept telling people to come North.  What was Abbott’s motivation?

Never Been a Time: The 1917 Race Riot that Sparked the Civil Rights Movement is a wonderful book.  I strongly recommend it.  It’s important to know all of our history and pass it on to our young, which is why my 15 years old niece Mariah is going to read this book as soon as I’ve completed writing this review.

Read Candlewick Press’s description of Never Been A Time: The 1917 Race Riot That Sparked The Civil Rights Movement.